Amid the stirring, kneading and braiding, came the unity, empowerment and bonding as 500 Jewish women gathered in Potomac on Sunday for a mega challah bake. The massive event held at the Bolger Center was the first time that the Chabads of Maryland, Washington, D.C., and Virginia participated in a joint initiative.

The participants, many of whom were mothers and their daughters, joyfully made and braided their own challah and then took them home to be baked later. “Here tonight, we are just Jewish women united,” declared Nechama Shemtov, director of AURA Jewish Women. She explained that each strand of challah represented the individual but when braided together to form a whole loaf, the challah symbolized how people can be separate yet joined together as one. 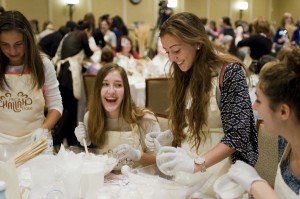 Rhoda Dermer, wife of Israeli Ambassador to the United States Ron Dermer, spoke about how hard this summer in Israel has been but how well its people are faring. “The people of Israel are stronger than ever, and that despite the enormous challenges we face, we have every reason to be optimistic about our future,” she said.

Chana Raichik, co-director of Chabad Upper Montgomery County, echoed Dermer’s thoughts as she led the reciting of psalms for Israel. Pray for Israel “not in fear or despair… but let’s do so with a tremendous sense of gratitude,” she said. 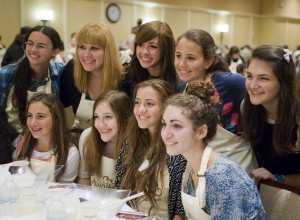 Carefully measured-out amounts of flour, sugar, dry yeast, salt and oil and a clean apron were put next to each of the 10 place settings at all 51 tables. Each participant also received her own copy of the recipe. Had the organizers realized how popular the event was going to be, they would have used a larger ballroom, they explained, adding that registration had to be closed five days prior to the mega bake. Mega challah bakes are occurring all over the United States and Canada this year. 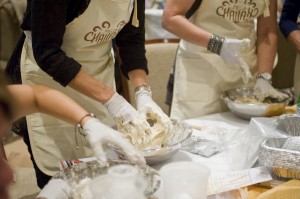