When I chanted the haftarah during my bar mitzvah ceremony in 1992 at Temple Rodef Shalom in Falls Church, the words carried extra meaning. That’s because a year earlier my father and I boarded a TWA airplane (remember those?) bound for Tel Aviv, and I made my first trip to Israel where the biblical stories we read about in synagogue took place.

My haftarah portion was about a battle that occurred more than 3,000 years ago at Mount Tabor, rising to a height of 1,886 feet in northern Israel’s lower Galilee region overlooking the Jezreel Valley. The Israelite army led by military commander Barak and prophetess Deborah defeated the Canaanite forces led by Sisera. As recorded in Judges 4:4-5:31, Deborah relays the word of God to Barak:

“Go and gather your men toward Mount Tabor, and take with you 10,000 men of the children of Naphtali and Zebulun. And I shall draw to you, to the brook Kishon, Sisera, the chieftain of Jabin’s army, with his chariots and his multitude; and I will give him into your hand.”

We toured Israel, including the holy cities of Jerusalem and Safed, the center of Jewish mysticism and Kabbalah that always hold a special place in my heart. Next we traveled across the Sinai Peninsula by bus, crossed the Suez Canal and arrived in bustling Cairo. We toured Egypt and flew back to the United States.

My understanding of the world changed after that visit to the Holy Land. I realized for the first time that America is a young country with a lot to learn and that there is a big world beyond our borders. I also became a Zionist on my trip. My bar mitzvah speech was about the contrasts between largely Christian America and Jewish Israel, and how for the first time in my life I was surrounded by millions of “members of the tribe,” my people. I was in a country where you could be confident and secure as a Jew.

Trekking to the top of Mount Tabor and looking upon the Jezreel Valley as Barak did thousands of years ago made my haftarah portion come alive. No money, no gift could eclipse or even equal what my experience on Mount Tabor meant to me. 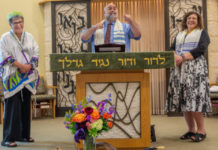