“I am someone who lives very much in the Jewish world. In a way, Moment is my congregation,” said Epstein. “Unlike Justice Ginsburg, I was not a dutiful young girl who enjoyed her studies. I did go to Hebrew school and I was thrown out of Hebrew school. I have spent my life making up for that.”

The book celebrates Jewish women, spanning biblical times to the present: Miriam from the book of Exodus; medieval diarist Gluckel of Hameln; Anne Frank; champion of community healthcare for the poor Lillian Wald; Florence Prag Kahn, the first Jewish congresswoman; among others. But the book devotes special attention to Ginsburg herself.

Many see Ginsburg as an icon who suddenly appeared in the role of a Supreme Court justice. But most of her career was before she was elevated to the bench. She was an attorney during a time when women were not taken seriously in the profession. Not only did she face adversity in law school, but while growing up in an observant Jewish household.

As a child, Ginsburg attended Hebrew school and was good student, Epstein said. But when Ginsburg’s mother died when Ginsburg was 16, as a woman, she was forbidden from taking part in the prayers. “This really turned Ginsburg off from traditional, patriarchal Judaism of the time,” said Epstein. 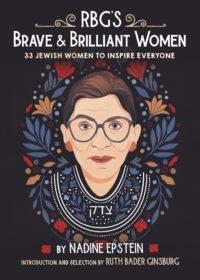 To write the book, Epstein worked closely with Ginsburg in the year leading up to the latter’s death, in 2020. “[The book] came out of a conversation,” said Epstein. “I was inspired by her level of persistence. She was also very brave in that she really spoke out.

“I had a conversation with her once where I talked to her about how I really like to be a behind-the-scenes person — that I do not particularly like to be out front, up on stage. She said, ‘Get over it. If you do not speak your mind, no one is going to speak it for you,’” recalled Epstein.

“There was a reason why she wanted to do this book — because these women had become her Judaism and she wanted to share their stories and why they were important to her and to the world.”

Moment, for which Epstein has served as CEO and editor-in-chief since 2004, has long been a respected national publication of Jewish arts and ideas. Founded in 1975 by Nobel laureate Elie Wiesel and writer and activist Leonard Fein, it has become, Epstein said, “my life’s work.”“I have tried to make Moment transcend denominations — and I hope it transcends polarization in politics and the Jewish community,” she added.

After giving a few early editions of the new book to young readers, Epstein had a revelation. “I was astonished to realize that few of our young readers knew that women had not always had the same rights as men, and that women still do not have the same legal rights,” said Epstein. “I think that led us to want to explain what the next generation can be doing to change this.”

So Epstein concluded the book with a call to action: “If you are trying to change someone’s mind, arguing is often not the way to do it. It is better to build trust.”

One of the final messages Epstein leaves her readers with is that if they do nothing else, they should vote. “It is a long process of creating change and I think that Justice Ginsburg encompassed that.”