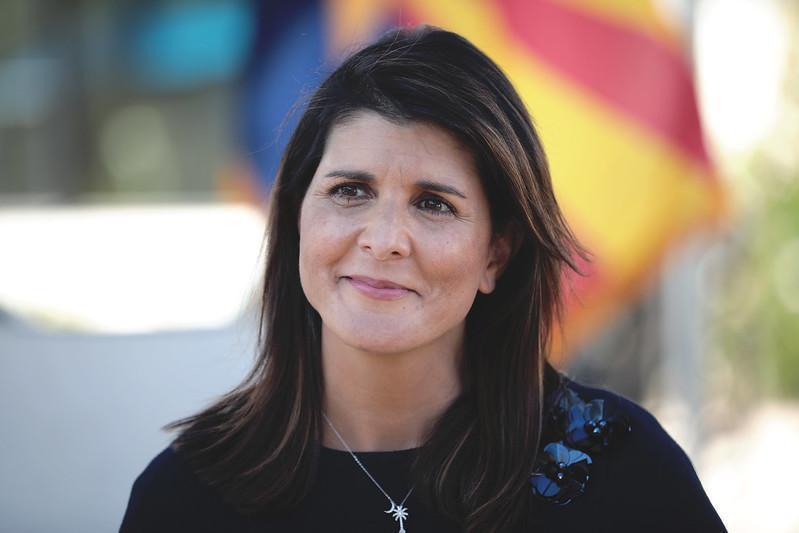 (Nikki Haley by Gage Skidmore is licensed under CC BY-SA 2.0)

Growing up in a small South Carolina town, where she and her family were the only Indian people, Nikki Haley knew what it was like to be bullied. That experience fed into why, so many years later as the United States ambassador to the United Nations, she became known as a fierce defender of Israel.

“That little girl on the playground never forgot what it felt like to be bullied, so when she sees someone else bullied, she gets in front of that,” Haley said at a virtual talk hosted by Beth Tfiloh Congregation in Baltimore.

On Tuesday, Haley was the speaker at Beth Tfiloh’s Dahan Annual Lecture. Haley and Beth Tfiloh Rabbi Mitchell Wohlberg discussed a variety of topics including Iran, the U.N. and 2024.

In addition to being the former U.S. ambassador to the U.N., Haley is the former governor of South Carolina. She was the first female governor of South Carolina and first female Asian-American governor in the U.S. She made national news after the Charleston church shooting in South Carolina, when she worked to have the Confederate flag taken down from statehouse grounds. She is now considered a potential candidate for the Republican nomination for president in 2024 and is especially popular among Jewish Republicans.

Haley’s conversation with Wohlberg began with a discussion about her upbringing in South Carolina. She was bullied, she said, but she also learned essential lessons that she carried for the rest of her life. Her mother taught her to find her similarities with the other kids, rather than focus on differences.

Once, she recalled, when she confronted some Saudi emissaries about their hypocrisy regarding the Jewish state, they admitted to her that they were unfair to Israel, but they would continue to attack Israel at the U.N. because it was popular among their constituents. She told them they would have to eventually tell their constituents the truth.

“The truth and that courage came out when we saw the Abraham Accords signed,” Haley said.

The Abraham Accords were possible because the Emiratis trusted the U.S., and they understood that being allies with Israel would be advantageous for them, Haley said. Former President Donald Trump also believed that peace in the Middle East didn’t have to start with the Israeli-Palestinian issue.

Wohlberg asked Haley about Saudi Arabia and how the U.S. and Israel should approach a country that would make a good ally but does not share their same values, as evidenced by the murder of Jamal Khashoggi, a journalist and critic of the Saudi regime.

“You stay true to our values first,” Haley said.

The conversation also covered Iran, with Wohlberg asking Haley if it is inevitable that Iran would one day get nuclear weapons.

“We don’t ever want to say it’s inevitable,” Haley replied. “Our job is to make sure we do everything we can to keep peace in that area.”

When she was ambassador, wanting to learn more about the Iran deal, Haley traveled to Vienna to visit the International Atomic Energy Agency, which monitored whether Iran was following the stipulations of the deal. Haley learned that Iran was not allowing the agency to look at military installations and universities where the nuclear research was happening, and the agency had to give Iran 45 days notice to inspect any area. With these restrictions, combined with Iran’s violations of U.N resolutions, Haley recommended to Trump that the U.S. leave the Iran deal.

Haley also had a lot of praise to give Trump, at one point calling him “one of the best presidents we’ve had in a long time.” At the same time, she was disappointed in his actions after the election and leading up to the Georgia run-off, she said. She also said she believed it unconstitutional to impeach a president on his way out of office, and she felt that he gave a strong speech at CPAC.

Wohlberg ended the conversation with a topic of interest to many.

“2024,” Wohlberg said. “There are rumors and talk of Nikki Haley being a candidate for president. I know you can’t go out there now and say, ‘I am a candidate.’ But just between us and some of the members of my congregation if we promise not to tell.”