Ethel Hutkof
Ethel Hutkof, of Silver Spring, died Nov. 29. She was the beloved wife of the late Mortimer Hutkof; devoted mother of Linda Friedman (Steve) and Barbara Samuel; loving grandmother of Elizabeth Robinson (Jeffery), Jeremy Friedman (Emily), Abby Rosenberg (Jason); and great-grandmother of Maddyn Robinson and Shea Rosenberg. She is also survived by her friend Morine Washington-Eady. Contributions may be made to Friends of Maryland State Library for the Blind and Physically Handicapped. Services entrusted to Sagel Bloomfield Danzansky Goldberg Funeral Care.

Lionel M. Shapiro
Lionel M. Shapiro, of Silver Spring, died Nov. 8. He was the beloved husband of Charlotte Gumnit Shapiro; devoted father of Stephen, Robert (Joni Lucas) and Bruce (Tammi) Shapiro; and loving grandfather of Frankie, Celia, Jonathan and Rebecca. Contributions may be made to Shaare Tefila Congregation or to the Jewish Federation of Greater Washington. Arrangements entrusted to Torchinsky Hebrew Funeral Home. 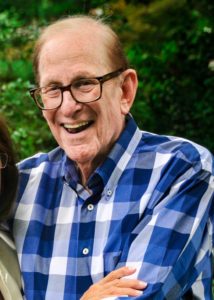 A faculty member at American University for 32 years, Dr. Zauderer co-developed and directed the Key Executive Leadership Program and the Master’s Degree in Organization Development, receiving the university’s Award for Academic Program Development. He also served as program director of the Master of Public Administration Program.

He was a beloved professor due to his commitment to his students, his passion for quality education and push for meaningful dialogue. His students honored his leadership by both establishing a scholarship in his name and planting a legacy tree and monument on the American University campus. In addition to his teaching duties, Dr. Zauderer published a number of well-respected articles that explored issues of character, integrity and civility in the workplace. His article “Leadership Lessons from World Class Coaches” is widely used in coaching clinics at all levels. Upon retiring from American University, he became a senior adviser at the Brookings Institution, where he developed and directed the Mastering the Art of Public Leadership Program.

Dr. Zauderer always said that he was put on this earth to teach. His commitment to public service will also live on through his influence on various boards and committees in the region, including Smith Center for Healing and the Arts, DC Bar Ethics Committee, the Ethics Panel of the Montgomery County Public Schools, and the Board of Editors of the Public Manager Journal.

Anyone that came into Don’s life was touched by his values, humor, caring, curiosity, and unsolicited guidance. He was energized by stimulating conversations, music, books, history, politics and movies — and recently a passion for playing the ukulele.

He is survived by his beloved wife of 54 years, Judy Polster Zauderer; daughters Karin Zauderer and Laura Zauderer Baldwin (Grant); and his grandson, Aaron Baldwin.

Contributions may be made to the Donald G. Zauderer Key Executive Leadership Scholarship at American University, or the Smith Center for Healing and the Arts.