Haramati was born in Jerusalem in 1930, son of Shmuel and Sarah (nee Mirkin) Haramati. As a teenager, he was recognized as an exceptional student and began a teaching career before his 16th birthday.

During the War for Israel’s Independence in 1948, he was severely injured and declared dead, before being saved by an observant nurse. Following his recuperation, he began teaching in the Israeli educational system, while continuing his academic studies in pedagogy and Jewish education at the Hebrew University in Jerusalem.

Haramati and his wife, Dinah, were recruited by Joel Braverman to teach at the Yeshivah of Flatbush High School in Brooklyn, N.Y., and relocated there in 1956. Over the next 45 years, Haramati led the Bible department and taught thousands of students, while also leading classes in the wider community.

Haramati spent many summers as a leader in Camp Massad, a pioneering Jewish camp immersed in Hebrew language, Jewish tradition and Zionism.

In 1994, he received the prestigious Covenant Award in Jewish Education, during which time he expressed his life’s mission: “I strongly believe that my calling is to guide our young people in their formative years… As our sages said: ‘One who teaches Torah to another person’s child, it is as if that person gave birth to that child.’ With these strong motivational words in mind, I have dedicated myself to my chosen profession: the education of Jewish youth.”

In 2001, he and his wife retired from full-time teaching and relocated to Silver Spring, where they resumed teaching evening classes to the community.

He was buried in Jerusalem. In addition to his wife of 64 years, he is survived by three sons, Aviad (Claire) Haramati of Silver Spring, Nogah (Linda) Haramati of New Rochelle, N.Y., and Raz (Debra) Haramati of Englewood, N.J.; 14 grandchildren and four great-grandchildren. n

His parents, Morris and Jennie Klein, immigrants from Eastern Europe, faced severe economic hardships during the 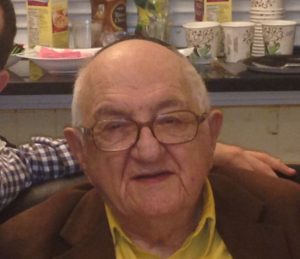 Depression, but worked hard to ensure he received a proper education.

His childhood years were spent in New Bedford, Mass., surrounded by many relatives with whom he kept in touch until his final day.

In 1954, Klein married Ruhama Dmiel, who was born in Israel and was working for the Israeli Embassy.

In 1963, with their two young children, and with Klein hardly speaking any Hebrew, they moved to Rehovot, Israel. Klein began working for the Weizmann Institute.

They returned to the Washington area in 1965 and eventually settled in the Kemp Mill area of Silver Spring.

Most of Klein’s career as a physicist was spent at the National Bureau of Standards (later NIST) in the area of thermodynamics.  After his retirement from the government, he went to work at the Gas Research Institute in Chicago.

In 1976, Ruhama died at the age of 45. After Klein’s daughter graduated from high school, he moved to Chicago where he spent the next 10 years. During that period, in 1985, he married Suzette Alden Pollak, also widowed, who had two children.

The couple moved to Washington and became active members of Kesher Israel Congregation. After Suzette died in 2015, Klein moved to Ring House but spent Shabbatot with his son and daughter in Potomac.

Klein was a board member of the Berman Hebrew Academy; Kesher Israel Congregation, where one of his tasks was to run the Hospitality Committee; and the National Capital Mikvah. He was also an active member of many professional societies and a volunteer for many chesed organizations.

Klein is survived by his three children, Nehemiah (Rina), David (Michele), and Sara (Paul); Suzette’s children Molly (Phil) and Danny (Esther Goldie); 20 grandchildren and seven great-grandchildren. Other survivors include his sister Beverly Zuller, and many nieces and nephews.

Donations can be made to Bikur Cholim of Greater Washington, Berman Hebrew Academy or Kesher Israel Congregation. n