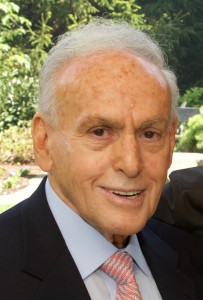 Joseph Wilf, a Polish-Jewish Holocaust survivor and founder of one of the country’s largest real estate development companies, has died at 91.

He and his brother Harry founded the Wilf Family Foundation in 1964 and have since contributed more than $200 million to Jewish causes. Joseph was a founder of the American Society for Yad Vashem, a U.S.-based fundraising arm for the Israeli Holocaust museum, and a benefactor behind Yeshiva University’s Wilf campus in New York City.

Wilf, the father of Minnesota Vikings owners Zygmunt “Zygi” Wilf and Mark Wilf, died on Aug. 3 at his home in Hillside, N.J., according to information released by his family.

The cause of death was not specified.

Wilf was born in Jaroslaw, Poland, in 1925. During World War II, he was deported with his brother and his parents to a Siberian work camp. They all survived but did not go back to Poland when anti-Semitic pogroms erupted there after the war. His sister Bella died in the Warsaw Ghetto.

“There were only two Jews in my class in high school,” Wilf recalled in remarks during the groundbreaking for a new museum at Israel’s Yad Vashem memorial in 2000. “We were totally isolated from the rest of the students. We were not allowed to participate in sports, no one ever talked to us and the teachers were distant. It was as if there was an organized boycott against the Jews.”

He and his wife Elizabeth — known as Suzie — married in Germany in 1949. The Wilfs eventually moved to the United States where he founded the Garden Homes real estate company, which has since built more than 100 shopping centers and housing developments.

In addition to his wife and sons, Wilf is survived by daughters-in-law Audrey and Jane, nine grandchildren and five great-grandchildren. Another son, Sidney, had died.

Lou Davis, a television political reporter who covered the Maryland State House for more than three decades, died of pancreatic cancer in his Millersville home on Aug. 2. He was 79.

Davis was born Ludwig Davidsburg in Aschaffenburg, Germany, and he and his family settled in Newburgh, N.Y. in 1938, WBAL-AM reported.

He is survived by his wife of 39 years, Laurene Weisberg, sons Josh Davidsburg, of Norfolk, Va. and Andrew Davidsburg of New York City and sister Shirley Rose of Sarasota, Fla., The Baltimore Sun reported.

Marilyn Binin Tayler of North Bethesda, died on July 8 at the age of 86 with family by her side. She was the beloved wife of 65 years of Norman Tayler, devoted mother of Baron, Abrielle (Marissa) Tayler-Levine, and Andra (Benyamin) Fleischman; daughter of the late Abraham and Lena Binin, and sister of the late Earl Binin. She is also survived by six grandchildren, nine great-grandchildren, and three nieces and their families.

She was a retired Montgomery County Public School teacher. During her years of teaching, she developed an arts program called Creative Carousel that was used in the school system for a number of years. In retirement, she and her husband enjoyed many vacations, including cruises, as well as traveling with or to see their grandchildren and great-grandchildren. She also volunteered for several years at Call For Action, working with consumer advocate Shirley Rooker.