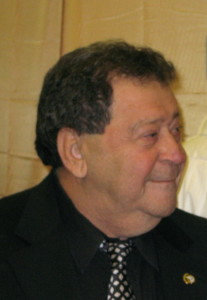 JERUSALEM — Benjamin Ben-Eliezer, a former Labor Party leader and defense minister who served in the Knesset for 30 years, has died.

Ben-Eliezer, who withdrew from the country’s presidential election in 2014 over corruption charges, died on Aug. 21 in a Tel Aviv hospital. He was 80.

In the early 2000s he was the defense minister for four years under Prime Minister Ariel Sharon during the second Palestinian intifada. The West Bank security fence was built during his tenure.

In December 2014, Ben Eliezer resigned from the Knesset for health reasons. A year later he was indicted on charges of receiving more than $500,000 from businessmen in return for political favors. He paid a nearly $3 million fine in a plea bargain in May, which kept him out of prison.

Along with being defense minister, he served in the Cabinet as housing, infrastructure, communications, and industry and trade minister.

Ben-Eliezer was born in Basra, Iraq, in 1936 and immigrated to Israel as a teen immediately after the birth of the state. He had a distinguished military career in Israel, beginning his service in the Israel Defense Forces in the Golani Brigade, which he served as an officer. He served as deputy battalion commander during the Yom Kippur War and was appointed battalion commander of the IDF brigade responsible for protecting the Lebanese border. He was the first commander of South Lebanon, and served as commander of the Judea and Samaria region for four years until 1982, when he retired from the IDF, returning in 1984 for one year to serve as coordinator of government activities in the West Bank and Gaza.

On a visit to Tunisia in 1994 with Prime Minister Yitzhak Rabin, Ben-Eliezer became the first Israeli minister to meet PLO Chairman Yasser Arafat.

In December 2014, Ben-Eliezer received a kidney transplant and several months later was placed in a medically induced coma with a serious case of the flu until his health improved.

“Fouad served the State of Israel for decades as a fighter, commander, public servant and senior government minister,” Israeli Prime Minister Benjamin Netanyahu said in a statement. “I knew him and I esteemed his contribution and his special personality. In my many conversations with him, Fouad expressed his concern for – and commitment to – the future of the State of Israel that he loved so much. May his memory be blessed.” n

Prominent French fashion designer Sonia Rykiel, who was known for her knitwear designs, died on Aug. 25 at 86.

Rykiel, dubbed the “Queen of Knitwear,” had been suffering from Parkinson’s disease since the late 1990s.
She was known for celebrating women’s bodies with knitted striped clothes that clung to the body.

Rykiel often broke unspoken fashion rules, such as by designing clothes for women of all ages rather than catering to a younger audience.

The Paris native was the daughter of a Jewish Polish mother and Romanian father. She married Paris boutique owner Sam Rykiel in 1953. The couple had two children, Jean-Philippe and Nathalie, and divorced in 1968.

Nathalie serves as the managing and artistic director of her mother’s fashion label.

“It is a sad day but Sonia Rykiel leaves behind her an extraordinary legacy,” said Jean-Marc Loubier, chairman and chief executive of First Heritage Brands, the parent company of Rykiel’s label.

The office of French President Francois Hollande said: “She had invented not only a style but an attitude, a way of life, and gave women freedom of movement.”