Rabbi Mayer Abramowitz, who opened the doors of his Miami Beach synagogue to waves of Cuban exiles beginning in the early 1960s, died Feb 2. at his home in Miami Beach. He was 97.

Abramowitz, longtime leader of Temple Menorah, ministered to hundreds of Jews who arrived in the United States as part of Operation Pedro Pan, a mass exodus of more than 14,000 unaccompanied Cuban minors from 1960 to 1962.

Cuban exiles continued to call Temple Menorah their spiritual home over the years, earning Abramowitz the title “the father of the Cuban Jewish community.”

“Rabbi Abramowitz was so well known in our Cuban exile community because he tried hard to build bridges between different groups,” Rep. Ileana Ros-Lehtinen (R-Fla.) told the Miami Herald. “He was especially helpful in the tough early years when so many Cuban refugees were coming over and we were so unfamiliar with how to find a job, get help for the elderly, or feed young children. The faith community, as always, really helped so many Cuban refugees. And Rabbi Abramowitz set the tone for others like him to emulate his kindness. A real mensch.”

Abramowitz was born in Jerusalem on Dec. 13, 1919, and arrived in New York in 1928. He earned a bachelor’s degree at Yeshiva University and rabbinical ordination from the Jewish Theological Seminary in 1944, according to the Herald. As a chaplain and first lieutenant in the Army stationed in Europe, he served Schlachtensee-Templhof, a displaced persons camp in Berlin, where he met his future wife, Rachel, a Holocaust survivor. He was also active in the Bricha, the underground effort that helped Holocaust survivors escape post-World War II Europe and go to Palestine.

After his military service, Abramowitz served as chief emigration officer for the American Jewish Joint Distribution Committee in Italy. In 1951 he and Rachel moved to Miami, where he would become rabbi at

Abramowitz credited an early trip to Cuba to his lifelong interest in the beleaguered island nation and its people.

“I don’t know who took me to Cuba because I never took a vacation, but it was probably God,” Abramowitz told the Miami Herald when he retired. 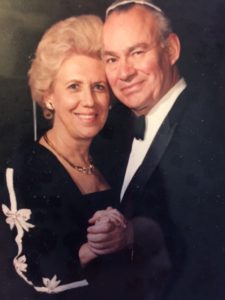 She held leadership roles in the Hebrew Home of Greater Washington and Jewish Council on Aging, where she was honored as a life member. She was also awarded the Rosalie and Leon Gerber JCA Distinguished Service Award and the Jewish Social Services Agency George Pikser Award.

She was a longtime, dedicated supporter of the United States Holocaust Memorial Museum and worked to create the exhibit “Remember the Children” and the Wall of Tiles display done by children.

She was also vice president of the Washington Performing Arts Society.

Strauss loved to cook and was known for making apple toffee, chocolate and rum bundt cakes which she delivered all around town to brighten people’s day.

Strauss was the daughter of Benjamin Futrovsky and Eva Chidakel. A daughter, Evalyn Strauss Luban, died in 2003; her husband, Martin, died in 2004.

She is survived by two children, Steven Strauss (Linda) of Bethesda and Beth Strauss Bonita of Olney, and four grandsons.

RIO DE JANEIRO — Jules Sauer, a refugee from Nazi Europe who became one of the world’s leading gemstone and jewelry authorities, has died.

Sauer, who was nicknamed “Gemstone Hunter” after discovering Brazil’s first emerald mine in 1963, died Feb 1, in that country. He was 95.

After finding the mine, German and English experts refused to recognize the stones as emeralds until Sauer turned to the Gemological Institute of America for a verdict. He was vindicated and earned the new moniker, according to the website Metropoles.

“Gemstones are a one-time harvest,” he used to say.

In 1966, his high-end company Amsterdam Sauer was the first South American jeweler to win the Diamonds International Award, the most prestigious recognition in international jewelry. The Amsterdam Sauer Museum, in Rio, exhibits the largest private collection of precious gems in Latin America.

In 1939, the 18-year-old Frenchman fled the Nazis, first to Portugal and then to Brazil, where he would establish his firm. He opened his first store in 1956 beside the legendary Copacabana Palace hotel in Rio.

“I went to school until the day Hitler invaded Belgium on May 10, 1940,” Sauer told the Person’s Museum project. “I lived at my uncle’s house in Anvers, but that day my uncle was in England and I was alone. I had two bikes; I got the best and I left. Goodbye Belgium. I went to Lisbon by bicycle.”

“He educated hundreds of young people in this noble profession, he just wanted to teach them a profession,” Wurman said. “He was a humanist with touches of a philosopher.”