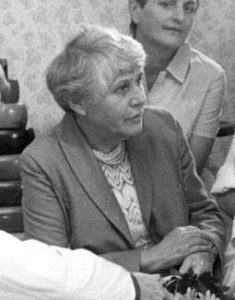 Woman who earned doctorate 80 years after Nazis’ denial, dies at 104

Ingeborg Syllm-Rapoport, a German neonatologist who passed her doctoral defense exam nearly eight decades after she was denied the opportunity by the Nazis, has died at 104.

She reportedly died March 23 in Berlin. A funeral will be held in the German capital in May, her son told The Associated Press.
Syllm-Rapoport, a former professor of pediatrics and head of the neonatology department at Berlin’s prominent Charite

She completed her thesis on diphtheria in 1938, but was refused entrance to the oral exam by the Nazi authorities because her mother was Jewish.

Syllm-Rapoport immigrated to the United States in 1938 and was required to study for two additional years to be certified as a doctor, although she had graduated from a German medical school. She married in 1946, and the couple returned to Germany in 1952 after her husband was persecuted by anti-communist efforts during the McCarthy era.
She is survived by four children, nine grandchildren and 13 great-grandchildren.

Chuck Barris, creator and host of ‘The Gong Show,’ dies

Chuck Barris, best known as creator of “The Gong Show,” “The Dating Game” and “The Newlywed Game,”  — TV hit game shows that put the spotlight on contestants  — died March 21 at his home in Palisades, N.Y., according to The New York Times. He was 87.

In the 1960s, he came up with “The Dating Game,” in which bachelor and bachelorette contestants expressed their romantic desires, and “The Newlywed Game,” which highlighted contestants’ honeymoon happiness and adjustments. In the 1970s, he was the creator and host of “The Gong Show,” which gave contestants who were generally short on talent their moment in the spotlight until one of the celebrity judges couldn’t take it anymore and hit the gong to terminate the performance. Previously, he wrote the pop song “Palisades Park,” a rock ’n’ roll hit for Freddy Cannon in 1962, according to the Times.

Writing for The Forward, Ben Ivry said that Barris “proved that one Jewish man’s inner conflicts could entertain America in a series of game shows,” and also said: “A sense of humor fixed at the level of an overstressed bar mitzvah boy in desperate need of Ritalin was a trademark of Barris’ successful career.”

He noted that Barris was considered everything from a king of trashy shows to someone who helped struggling artists to a man whose funny shows celebrated the variety of human beings. He quoted critic Tom Shales’ 1977 comments on “The Gong Show,” in which Shales said: “People make fools of themselves, but not for Amana freezers. They do it for the incomparable thrill of fleeting fame.” Shales also called the show “human comedy” and said it was “life itself.”

Barris was born in 1929 in Philadelphia to Nathaniel Barris, a dentist, and the former Edith Cohen, and graduated from Drexel University in 1953, the Times said.

He started in a management training program at NBC in 1955, but the department he was in was eliminated. In 1959 he was ABC’s chief of West Coast daytime programming, though he yearned to make his own shows, the Times said. “The Dating Game” — in which a contestant quizzed three unseen others of the opposite sex and then chose one for a date — was the first hit.

He tried his hand in the movies with “The Gong Show Movie” in 1980. He directed it and wrote it with Robert Downey Sr.; it flopped, according to the Times.

He had also turned to writing. In his alleged 1984 autobiography “Confessions of a Dangerous Mind,” he asserted that he’d been a CIA assassin while working in TV in the 1960s. A film version was produced, and both drew the question of whether that was true. The CIA said no, the Times wrote.

He continued writing, including the 2010 book “Della: A Memoir of My Daughter,” about his only child, who died of a drug overdose in 1998, at 36, according to the Times.

Two marriages ended in divorce. He is survived by his wife, the former Mary Clagett, the Times said.
The Times noted that during a 2007 appearance at the Book Passage bookstore in Corte Madera, Calif., he spoke about how he probably would remembered:

“I would love to be known as an author, but I don’t think it’s written that that’s the way it’s going to be. I think on my tombstone it’s just going to say, ‘Gonged at last,’ and I’m stuck with that.” n