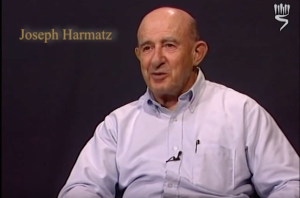 Joseph Harmatz, leader of Jewish ‘Avengers’ of Nazis, dies at 91

Joseph Harmatz, a Holocaust survivor who led a group of Jews seeking to kill Germans in revenge for the Holocaust, died. Harmatz’s death was confirmed on Sept. 26 by his son, Ronel, according to The Associated Press. Harmatz was 91.

He was a leader of the Jewish “Avengers,” or “HaNokmim” in Hebrew, a group of approximately 50 Holocaust survivors founded by Israeli poet Abba Kovner in order to take revenge on Germans for World War II.
Harmatz, who was born in Lithuania, was one of the last surviving group members who carried out a poisoning of Nazi SS officers in an American prisoner-of-war camp in 1946.

More than 2,200 Nazis fell sick, but no one is known to have died from the poisoning. When Harmatz proposed to Jewish leaders in pre-state Israel a plan to kill as many Germans as Jews who died in the Holocaust, figures like David Ben-Gurion were said to be appalled.

“We didn’t understand why it shouldn’t be paid back,” he told the AP last month about the group’s motivation. Harmatz, who lost most of his family in the Holocaust, added that his goal had been to kill “as many [Germans] as possible.”

Rabbi Simon L. “Sy” Eckstein, a renowned Canadian psychologist and authority in gerontology, and whose son Rabbi Yechiel Eckstein founded the International Fellowship of Christians and Jews, died in his Jerusalem home on Sept. 24. He was 96.

Born in Jerusalem in 1919, where he also spent the last several years of his life, Eckstein and his family moved to the United States in 1928.

He lived in the Bensonhurst section of Brooklyn, where he attended Yeshiva Chaim Berlin in middle school, then Torah Vidas in Williamsburg. He earned his bachelor’s and doctoral degrees from Yeshiva University, as well as his ordination from the Rabbi Isaac Elchanan Theological Seminary. He later earned a master’s degree in psychology from New York University.

After marrying Belle Hirschman, he moved to Ottawa in 1952, where he became the city’s chief rabbi. He oversaw several synagogues and joined the faculty of the Department of Religious Knowledge at Carleton University.

He retired from the rabbinate in 1975 but continued to influence the community, often appearing in local media such as The Ottawa Citizen and Ottawa Journal.

During retirement, Eckstein pursued his passion of psychology, in which he obtained a second master’s degree specializing in gerontology, before deciding to immigrate to Israel with his wife, Belle, at the age of 91.
Eckstein is survived by his wife, Belle, and children Ahuva, Beryl, Rachayl and Yechiel, as well as 14 grandchildren and 40 great grandchildren.