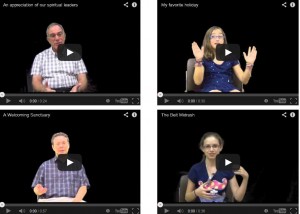 Fifty years from now, when Congregation Olam Tikvah celebrates its centennial, members will be able to go online and see what their ancestors had to say about the Fairfax synagogue during its 50th anniversary, which is being marked this month.

In addition to the gala event, set for Saturday, congregants have been making video clips in which they talk about their memories or favorite aspects of the Conservative congregation. About 50 videos have been posted on YouTube and can be accessed from Olam Tikvah’s website or Facebook page.

“You can see the first president of the congregation and you can see a third-grader up there,” says Rabbi David Kalender. “The concept was of a way to share memories and an emotional connection. A photograph is a memory, but hearing a voice goes straight to the heart.”

The videos amount to a conversation between the congregants and the future, he says.

In one, Len Levine, the congregation’s first president, describes the impetus for founding Olam Tikvah in 1964.

“Olam Tikvah was not founded by men,” he says, “but by ladies who decided they didn’t want to drive the kids to Hebrew school [at their old synagogue]. So they decided to form a [new] synagogue.”

In another, 9-year-old Maryn Newman talks about the pleasures of junior congregation. “I like that we have lunch there,” she says.

“This is not about remembering the good old days,” says Michelle Pearlstein, who has been a member since birth and recorded a video. The video project and the entire anniversary celebration is about “embracing our present and building out future.”

There is talk of the past, of course, says Brittanie Werbel, who is chairing the 50th-anniversary celebrations. Included are the origin of the synagogue’s opening day “Baseball Kiddush,” and when Olam Tikvah got a Holocaust Torah.

Kalender believes congregants will keep recording videos beyond the anniversary. “It’s what people are looking forward to and what they’re looking back about,” he says. “I don’t think this project will ever end.”