If you haven’t learned a thing about Chanukah since Hebrew school, it’s time to delve a little deeper into the holiday, which begins at sundown on Dec. 2. There’s more to it than dreidels — but you knew that.

So while you’re waiting for that last- minute Amazon Prime delivery to come, jot down these nuggets of knowledge and make yourself the intellectual hit of the Chanukah party.

1. Chanukah has many meanings

The eight-day holiday is known mainly for the Maccabees’ military victory over the Hellenistic-Syrian empire and for the rabbinic midrash of the miracle of the oil.

For Rabbi Hannah Spiro, of Hill Havurah in Washington, the holiday also tells the story of a time when Jews were divided between those who wished to assimilate into Hellenistic culture and those who did not.

“The biggest thing [about Chanukah] for me is how it’s really important for Jews to come together,” she said, regardless of the things which divide them.

2. Keep an eye on the candles

Chanukah is a holiday that’s light on mitzvot, or religious acts. One of them is watching the light of the menorah. According to Rabbi Sender Geisinsky of Chabad of Bethesda, it’s a bigger mitzvah for women than men.

Why? Because of Judith, Geisinskysaid. According to the Book of Judith, the town of Bethulia was besieged during the Maccabean wars by the general Holofernes.

Judith seduced Holofernes, and gave him salty cheese to eat and wine to slake his thirst. He became drunk, then fell asleep, and Judith chopped off his head. Afterward, she marched through the camp holding his head on a pike, which frightened the Syrian army and turned the war in the Judeans’ favor.

Because of Judith’s use of the foodstuff, some consider cheese to be a celebratory Chanukah food, Geisinski said.

Candles are lit at sundown for Shabbat and other Jewish celebrations, since the Jewish day begins at sunset. But lighting candles each night during Chanukah has additional meanings, Geisinsky said.

“We deliberately wait until it is dark because we are making a point. When things are getting dark, that’s when we need the light,” he said, adding that it is also a reminder that when the
Maccabees were victorious, it was a bright and joyous time.

Watching the light of the menorah should be a “contemplative and meditative experience,” Geisinsky said. And as with Shabbat candles, you should not use the Chanukah lights for
utilitarian purposes.

The menorah offers a loophole, however. The shamash, or helper candle, is not one of the Chanukah lights, since its purpose is utilitarian. And so, if you needed to read or write by light of the shamash, that would be OK.

Another mitzvah of Chanukah is to publicize the miracle of the holiday. Many people fulfill it buy putting their menorah in the window or outside the front door. Erica Brown, director of the Mayberg Center for Jewish Education and Leadership, said that if you have more than one menorah, don’t put them all in the same place.

“Each menorah should have its own distinct space,” she said. In other words, spread them out, so more people can see.

In the days of rabbis Hillel and Shammai, there was a debate over the proper way to light the Chanukah menorah. Shammai believed all eight candles should be lit the first night and then decreased each night. The Talmud recounts their reasoning: “The reason for Beit Shammai was according to the number of bulls offered up on Sukkot” in the Temple, a number which decreased each day over the holiday.

Hillel believed that the number of candles should increase each night to increase holiness. In the end it was decided, “We should never decrease a miracle,” said Rabbi Bruce Aft, of Congregation of Adat Reyim in Burke. “We should only add to it.”

7. What do you call that holiday?

The first celebration of Chanukah after the rededication of the Temple in Jerusalem was not a Chanukah celebration. It was a late celebration of Sukkot, the harvest festival that apparently had been abandoned during the conflict.

“You couldn’t set up a sukkah and live in it during a war,” said Rabbi Rachel Ackerman of Temple Shalom, in Chevy Chase.

If you don’t like latkes or sufganiyot, there are plenty of other fried foods to try for the holiday.
According to the Israel Forever Foundation, Greek Jews eat a deep fried dough soaked in honey, Spanish Jews eat fritters fried in goose fat and Russian Jews eat buckwheat pancakes. n 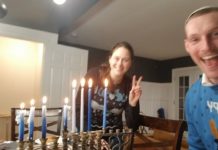 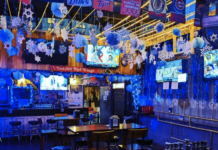 Because Jews need a holiday bar, too 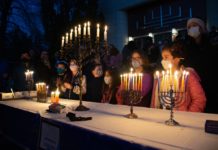 Coming home for the holiday