This weekend, the National Mall will be filled with one million bones, a virtual mass grave symbolizing the vast number of people who have been killed simply because of their race or religion.

“We keep saying never again, but it keeps happening again,” said Eve Lustig, whose bat mitzvah project helped raise money and awareness for the One Million Bones project, a massive art project in which people throughout the world crafted a rib, a foot, an arm, a pelvis, in honor of lives lost to current genocides and mass atrocities in such places as Sudan, South Sudan, the Democratic Republic of the Congo, Burma and Somalia.

The project is the brainchild of Naomi Natale, who was moved after reading We Wish to Inform You That Tomorrow We Will Be Killed with Our Families: Stories from Rwanda by Philip Gourevitch. The book haunted her, especially the fact that, as a college student at the time, she had been totally unaware of events in Rwanda.

“I find it inconceivable that we can say never again as it is happening again,” said Natale, 31.

As an artist, Natale, is aware that “art is an incredibly powerful tool” that can reach people who otherwise would be unaware of what is going on far from their neighborhoods. She wanted to do something that would bring attention to current-day genocides without overwhelming people so much that “they become paralyzed.”

She decided the symbolism of seeing a pile of bones in an enormous mass grave in the nation’s capital was the way to go, and she began speaking out wherever she could. At the end of her talks, the audience is invited to create their own bones out of clay and plaster.

“I am really passionate about the intersection between art and activism,” she said.

She recently spoke at the Religious Action Center of Reform Judaism’s annual meeting as well as numerous synagogues, sisterhoods and confirmation classes throughout the country.

She was warmly welcomed at Washington Hebrew Congregation, which has an active group working to end the killing in Darfur in Sudan.

Senior Rabbi Bruce Lustig, a child of Holocaust survivors, said he immediately thought the combination of “art and a cause was a smart one.” The bone-making was powerful for him. “We may look different, but we all have the same bones inside. We are all connected in that way,” he explained, adding, “It’s profoundly memorable.”

Lustig will be speaking at the D.C. event Saturday as will Holocaust survivor Eva Mozes Kor who was sent to Auschwitz concentration camp where she and her 10-year-old twin were used as human guinea pigs in genetic experiments.

Lustig said that between Mitzvah Day, his daughter’s bat mitzvah project and WHC’s confirmation class, his congregation has made nearly 3,000 bones.

And it didn’t stop there. The synagogue offered to keep a trailer it used during Mitzvah Day in its parking lot to hold bones made by others. The trailer currently is totally filled with boxes of bones that are being taken to the National Mall today in preparation for this weekend’s event.

“What is really cool for me is that the bones are arriving everyday,” he said.

The synagogue is also providing a bus that will leave the D.C. congregation Saturday at 8 a.m. Anyone wishing to join should go to the synagogue’s website for information.

His daughter, Eve, said that at first, she didn’t think working on the One Million Bones project was a good idea since “it wasn’t a project where you are directly helping someone.” But when she actually saw what the project entailed “that’s when I knew that was the project I wanted to do. When you are actually making the bone, it is saying you are feeling it and you are a part of it,” she said.

She also designed and sold a bracelet with the imprint “One Million Bones. Get Involved.” and began selling them at her synagogue and Georgetown Day School, where she is a seventh-grader. She helped arrange for the entire middle school to listen to Natale and make their own bones.

“Personally for me, I am really involved with arts. I dance, and I do musical theater. All arts, in general, are really important to me. That’s what got my attention,” she said.

Art also is what interested Kendra Rubinfeld, who attended a bone-making session at WHC. “I consider myself to be artistic and like to work with tangibles.” She “really connected with it in a direct way. I was touched by the project and inspired,” said Rubinfeld, who made a femur and spine bone.

Natale, a Ted Senior Fellow, called WHC “incredibly supportive,” and added that so many groups also have been helpful. She launched the project in March 2010 and since then has had more than 250,000 people and more than 2,000 schools participate, and has collected bones made in 130 countries and all 50 states.

Now that the project has come down to the wire, “logistically, it’s pretty insane,” she said in a phone interview last week. There are seven palates of bones in New Orleans that need to be shipped to D.C.

It all starts coming together Thursday when the bones will be delivered and set out around the National Mall. Then, Saturday morning, volunteers, all clad in white, will lay out the million bones, and yes, Natale stressed, there will be at least that many.

“We have counted over 980,000 and are still counting,” she said last week, adding that besides the bones, her organization is raising money. The Bezos Family Foundation is donating $1 per bone up to $500,000, she said.

When Natale started to think about how close she was to the actual day she has been planning for years, she said, “On the one hand, I am inspired. You can’t find solutions if people aren’t aware. This is the education part.”

However, she acknowledged, these bones won’t stop the killing. “Every country is so complex. Every conflict is so complex,” she said. “Over 6 million people have died in the Democratic Republic of the Congo. I really hope that when I have children, I am not talking about the same conflict.” 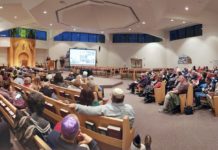