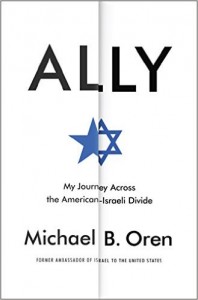 Michael Oren was Benjamin Netanyahu’s ambassador to the United States from 2009 to 2013. He’s also a liberal American Jew who grew up in New Jersey.

Both personas make their mark — especially in regard to President Barack Obama — in this highly readable memoir.

Bibi’s man in Washington begins by bashing the president’s so-called “opening to the Muslim world” speech in 2009 in Cairo.

That speech dismayed Israelis, especially his linking of Israel’s legitimacy with the Holocaust, which “denied 3,000 years of unbroken Jewish connection to our land.” (During his 2013 visit to Israel, Obama tried to make amends, Oren notes, by calling Israel “the historic homeland of the Jewish people” and discussing the 3,000-year connection between the people and the land.)

On Iran, he accuses the Obama administration of being two-faced. “Publicly, the president and vice president stressed Israel’s right to defend itself against any Middle Eastern threat. ‘Israel is a sovereign country and can best decide how to protect its citizens,’ went the administration’s official line. Off camera, though, the message was ‘Don’t you dare.’”

He saves perhaps his harshest criticism for Obama’s backtracking on his “red line” pledge to act if Syrian President Bashar al-Assad uses chemical weapons on his own civilians. After that, everyone, especially the Iranians, now understood that America “would dither before enforcing an ultimatum.”

Ally isn’t all slings and arrows. Oren praises Obama for his swift and positive response to Israel’s request for firefighting equipment to deal with the 2010 Carmel Fire. Supporting Israel in this way convinced Oren that Obama was not, as is often portrayed by conservatives, “anti-Israel. On the contrary, he was intensely supportive of a specific version of Israel — the Israel of refuge and innovation. But the Israel he cared about was also the Israel whose interests he believed he understood better than its own citizens and better than the leaders they chose at the ballot box.”

Despite their dislike for one another, his boss, Bibi, and the American president, are similar in many ways, Oren writes. Both consider themselves “the smartest men in the room. Both were loners, adverse to hasty decision making and susceptible to a strong woman’s advice. And both saw themselves in transformative political roles.”

In addition to his candid thoughts about Obama, Oren expresses some very controversial viewpoints, none of which are likely to endear him to American Jewry.

* On tikkun olam, he respects the American Jewish community as it responds to “Judaism’s ancient, compassionate appeal.” But often helping others comes at the expense of contributing to Jewish and Israeli causes.

* And on some Jewish journalists’ anti-Israel feelings: “Some, I knew, saw assailing Israel as a career enhancer — the equivalent of Jewish man bites Jewish dog — that saved several struggling pundits from obscurity. Others seemed to disdain Israel the way upper-class American Jews of German ancestry scorned the poor Jewish immigrants from Eastern Europe, the Yiddish-speaking “rabble” who allegedly made all Jews look bad. Others still, largely assimilated, resented Israel for further complicating their already-conflicted identity.”

But his memoir is more than a series of gripes. With the skill of a storyteller, Oren recounts his early days in the Zionist youth movement and a meeting with then-Israeli Ambassador to the U.S. Yitzhak Rabin — an encounter that changed Oren’s life; his journey to the Soviet Union to encourage Soviet Jewish refuseniks, during which he was harassed and more by KGB agents; and hitchhiking across the Lebanon border to join up with his IDF unit at the beginning of the first Lebanon War in 1982.

This is not Oren’s first foray into writing, and it shows. His two previous books – Power, Faith, and Fantasy: America in the Middle East, 1776 to the Present and Six Days of War: June 1967 and the Making of the Modern Middle East — were both best-sellers.

Ally demonstrates his strong suits, a scholarly outlook, felicity with words and a passion for Israel that is often seen in those who make aliyah.

I was disappointed that the memoir didn’t seem to break ground when it came to the powerful people, both Americans and Israelis, with whom Oren dealt during his tenure as ambassador. He remains in the political arena — he is a currently serving as a Knesset member for the Kulanu Party — and perhaps, as a result, he is wary of upsetting his new political apple cart.

First and foremost, though, Oren is an academic. I hope his unique perspective and talents are not lost as he pursues his career as a backbencher for a political party in the Knesset that — if the history of new Israeli political parties is any indication — may not even exist when Israelis next go to the polls.