The night Gidon Feen came out as gay at his Orthodox high school after-graduation party, he said he could feel his stomach boiling. While he had come out to his
close friends in the 11th grade, this was his entire school.

“Oh, by the way, I’m gay and I’m coming out tonight,” he said. And after a quick silence, he said the room burst into applause. “It truly was the best moment of my life.”

Feen, now a freshman at George Washington University, spoke of this moment and his initial struggles of being gay in an Orthodox Jewish family and community during All in the Family: Narratives of Gay Orthodox Jews and their Families.

The program, held Sunday at Ohev Sholom: The National Synagogue, began with an introduction from Rabbi Steve Greenberg, an openly gay Orthodox rabbi. His introduction was followed by a screening of the Israeli short film And Thou Shalt Love, which focuses on a young student trying to overcome feelings for a study partner at a yeshiva.

Feen said that growing up in an “almost haredi community,” followed by a modern Orthodox one, he didn’t encounter the word “gay” until he was in seventh grade and noticed it came with bad connotations.

He eventually came to terms with his sexuality and came out to his parents, who were happy and accepting, at a Shabbat dinner. But attending a yeshiva high school in Memphis, Tenn., he said he “felt tortured and oppressed,” and struggled with the fact that his religion didn’t seem accepting of homosexuality. In his senior year, he said, he gained full confidence and embraced the fact he was a gay Orthodox Jew, which led to his graduation party announcement.“People who come out don’t need to leave communities,” Feen said.

The two other speakers were mothers of gay children. Rena Fruchter’s daughter came out to her at a Jewish Orthodox Feminist Alliance conference 14 years ago. She said she felt clueless and insensitive for not having any idea her daughter was gay.

“Did this fit into a Jewish picture?” said Fruchter, director of arts integration at the Melvin J. Berman Hebrew Academy.

She recalled at first getting blank stares from rabbis she asked for advice and failing to find other parents in the community with gay daughters. Sunday, she spoke emotionally of a rabbi who recently spoke to students at her daughter’s former high school about supporting gay Jews.

“I want my daughter and others to not be celebrities because they’re gay,” she said.
Mindy Dickler’s son came out when he was a college freshman, home on break for Rosh Hashanah in 2011. Dickler joked about him making his announcement while standing in front of a closet.

She said that while she was speechless, she realized that he was still the same person he was before his announcement.

Like Fruchter, Dickler said she was lost at first, finding no local news coverage on Jewish LGBTQ life and couldn’t find any other families in her situation, but concluded that many in the community were still in the closet.

Eventually, she came in contact with someone Jewish at Parents, Families and Friends of Lesbians and Gays, or PFLAG, a national LGBTQ support group. Soon after, she co-founded JQ Baltimore, an organization that advocates for inclusiveness and educates the community on LGBTQ and civil/human rights.“We can’t sit idly by as family members struggle with self-acceptance,” she said.

Questions for the speakers included how to deal with hate speech from both students and members in the community, and from rabbis in the many factions of Judaism.

“I think the best way to address it is head on,” said Feen. “The way to respond isn’t with more hate. [It’s to] talk about the issue with a positive response.”

Dickler also noted that with the huge spectrum of Orthodox Judaism, the best way to make progress is by talking with those who are open, and then moving down the line. 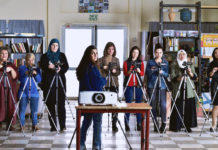