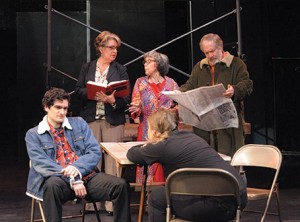 From Grover’s Corners, the fictional town created by all-American playwright Thornton Wilder, decades of theater goers — along with high-school English students — have been gently and tearfully nudged into considering the fleeting nature of life. Even its mundane elements cause an aching heart to crack open and bleed in Wilder’s poignant monologues when the everyday is gone forever. This lesson on living to the fullest has been brought up to date and reset in the land of strip malls and drive-thrus by playwright Darrah Cloud. Theater J’s world premiere production of Our Suburb, an endearing but sometimes treacly homage to Wilder’s 1938 Pulitzer Prize-winning play Our Town, with a Jewish twist.

Grover’s Corners is re-imagined as the Midwest suburb of Skokie, Ill., circa 1976, the same year a group of Nazi sympathizers requested a permit to march in this middle-class suburban idyll with its prominent Jewish population, including many Holocaust survivors and their descendents. Cloud, herself a Skokie native, draws her suburb as a haven from the dangers of urban living with its decaying city center, failing schools and increasing crime. Following Wilder’s structure, Cloud’s story tracks a pair of families, back-fence neighbors, and their offspring, perched on the cusp of adulthood.

Among Wilder’s theatrical innovations were his use of an onstage narrator and observer, now famous role of the stage manager, and allowing the story to unfold on an essentially bare stage. His original stage directions called for: “No curtain. No scenery. The audience, arriving, sees an empty stage in half-light.” Scenic designer Samina Vieth follows suit, setting the cast on and around a pair of two-story rolling scaffolds (Wilder called for his two young protagonists, George and Emily, to perch on ladders), propping a few flats here and there and adding in a chair and table as needed. This, along with the workaday attitude of the onstage manager character, lends the production a community-theater temperament — rough hewn and naive in its approach, in homage to Wilder’s wishes.

Among the production’s strengths, stage manager Jjana Valentiner, clad in black jeans and a black Led Zeppelin T-shirt, sporting a tool belt and headset, is a pistol of an explainer, with a wicked sarcastic streak to boot. She’s matter-of-fact one moment and commanding in calling light cues or places for the actors the next. Her commentary breaks that imaginary fourth theatrical wall, letting the audience into the intimate, behind-closed-doors scenes of daily life. And she can pull laughs and ad-lib as she races back and forth, double cast playing younger siblings in both families.

The heart of Our Town and Our Suburb is the budding romance between two teenagers, in this case bookworm Thornton Major (yes, we get it) and underachiever Ricky Edelman, who fall for each other, hard, after years of simply passing by. Sarah Taurchini is fresh-faced and love struck at her new beaux, played as a classic underachiever by Joshua Dick, who works at his dad’s butcher shop, Big Herm’s, after school.

The Edelmans — a Jewish family whose patriarch runs the town’s kosher butcher shop — and the Majors — whose breadwinner father works in sales downtown — share a fence, but little else. We’re soon rooting for young love as we see two long-married couples with cracks in their relationships: Mrs. Major has let the women’s movement pass her by, living for cocktail hour and for increasingly lengthy meetings with L.C. Minor (a winsome James Johnson), the grocery deliveryman, an African American renaissance man of sorts, while Mrs. Edelman has returned to law school.

Cloud throws a wrench into the sedate lives of these Skokie suburbanites: she chose the year the Nazis wanted to march. This conflict, while interesting, seems to muddy the simple but profound premise that Wilder mined so gracefully: that living life to the fullest is, in the end, all that matters. Instead, we see and hear how these two families face the issue and argue the circumstances. Law-school mom Mrs. Edelman (Barbara Pinolini as a strong-willed, outspoken but fair-minded advocate) provides the voice of reason and the legal underpinnings. Mr. Edelman, Michael Willis, is less worried about the intricacies of the law and more concerned about keeping his small business afloat. Across the backyard, World War II vet Mr. Major (an icy Jim Jorgensen) takes a more reactionary stance, getting out his pistol and recalling the horrors of war, while Mrs. Major, painfully brought to life by Kathryn Kelley, succumbs to an endless cocktail hour.

What should be the most poignant and revelatory reaction to this incident, from Mrs. Edelman’s mother, Mrs. Witkin, is unfortunately nearly a spoiler. Drained and stilted, Barbara Rappaport, as matriarch and a survivor, who lost most of her family in the concentration camps, mines melodrama not sensitive emotions. Even her accent meanders during the evening. The result robs the play of its moral core.

Judith Ivey, two-time Tony-winning actress, takes her directorial task to heart but sometimes the two-act production falls into blandness, rather that revelatory moments. Often it takes the ironic but no-nonsense temperament of the stage manager to keep the evening alive. The play’s three parts, of course, mirror Wilder’s original: daily life, love and marriage, and death. But somehow, Wilder — in stripping away theatrical trappings, forgoing realism for idealized scenes re-lived vicariously and for treading lightly on issues of deep import — crafted a classic. Cloud, in following his template, strives for the same effect, but somehow — maybe it’s the relentlessly unforgiving late ‘70s, as feminism gained a foothold, the me-decade loomed, and the last remnants of the freewheeling ‘60s faded to obscurity and a new tension overcame the nation — a fulfilling conclusion doesn’t pass muster. Instead, not to reveal too much, but the play leaves us with the unappealing thought that no one is safe, even in cookie-cutter suburban tract homes, danger resides. And that’s a bitter truth.

Our Suburb is onstage through Jan. 12, at the Washington DC Jewish Community Center in the District. Tickets are available by calling 800-494-8497 or at www.theaterj.org.