Vice President Mike Pence and United States Ambassador to the United Nations Nikki Haley delivered forceful remarks on the penultimate day of the 2018 AIPAC Policy Conference in Washington, with Pence promising that the U.S. would open its embassy to Israel in Jerusalem in May.

Pence focused his speech on Iran, insisting that the Trump administration would end the 2015 nuclear agreement if Congress can’t fix what it sees as flaws in the deal’s enforcement language. He said that as President Donald Trump had kept his promise to move the American embassy to Jerusalem, so it would on the nuclear deal.

“Make no mistake about it, this is their last chance,” Pence said to applause. “Unless this deal is fixed in the coming months, the United States of America will withdraw from the Iran nuclear deal immediately. Whatever the outcome of those discussions today, I have a solemn promise to Israel and the wider world: the United States of America will never allow Iran to acquire a nuclear weapon.”

But he made only passing reference to the administration’s long-promised regional peace plan, saying that the U.S. supported a two-state solution and that advisers Jared Kushner and Jason Greenblatt were “hard at work crafting our administration’s vision for peace.”

Pence began his remarks with a gaffe, mistaking the constituency he was addressing and  “bringing greetings from the most pro-life president … the most pro-Israel president in the history of the United States.”

Haley largely directed her fiery speech to the United Nations, defending Israel from what she called the international body’s “bullying.” She compared Israel’s geopolitical circumstance to her family’s when she grew up in the only Indian family in her hometown of Bamberg, South Carolina.

“My father wore a turban, my mother wore a sari. There were times when we were bullied,” Haley said. “You don’t pick on someone just because they look differently than you. … This idea has always been with me since I was a child, but I didn’t think it would come to play in the U.N. It turns out, bullying is a common practice in the U.N.”

Haley made no mention of a forthcoming peace plan, but she recounted the moves the Trump administration has made in Israel’s defense, like its withdrawal from the United Nations Educational, Scientific and Cultural Organization; its recognition of Jerusalem and her veto of U.N. resolution condemning that decision — all to thunderous applause.

And she said that the United States wouldn’t tie foreign aid solely to United Nations votes, but that it would take them into account.

“We’re not forgetting that vote,” she said of the U.N. resolution condemning the Jerusalem decision. “Like I said at that time, on that vote, we’re taking names. …  They should be one of the factors [in terms of foreign aid], and we are determined to start making that connection. … Israel’s not going away. When the world recognizes that, then peace becomes possible.”

Check back later this week for a full recap of 2018 AIPAC Policy Conference. 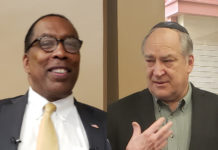