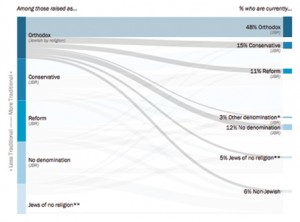 I got a call from Rabbi Levi Shemtov, director of American Friends of Lubavitch and the Chabad rabbi famous for his work on Capitol Hill. He wanted to talk about the recently released Pew study on American Jewry – specifically about Chabad’s absence from it.

He said he had just read an article that pointed out that Chabad seemed to be a no-show and asked how somebody could study American Jews and not mention Chabad.

Rabbi Shemtov did pique my curiosity into the Chabad Question, and I told him I’d look into it.

The writer of the article is Rabbi Tzvi Nightingale, director of Aish of South Florida. In the world of Orthodox organizations whose mission is to bring non-Orthodox Jews closer to tradition and, hopefully, to their version of Judaism, an Aish rabbi who argues that Chabad has more influence than it’s given credit for is like Burger King extoling the virtues of McDonald’s.

“Whoa, hold on a second. I don’t see any mention of Chabad in there,” Rabbi Nightingale writes in “I Am Chabad.”

He notes that while Reform, which the study says is the largest Jewish movement, has 875 congregations, Chabad has 959 centers.

“And this is precisely why this study is practically meaningless,” he writes.  “It is based on a completely outdated model and mentality and has totally ignored the most dynamic movement in Judaism in recent years.”

From this, it’s not clear whether the study is “practically meaningless” because Reform has fewer synagogues than Chabad has centers, or because Chabad isn’t named (and neither is Aish HaTorah, for that matter.)

In any case, Rabbi Nightingale decries “the holy grail of membership,” as a tool of measurement.

“The folks at Pew are using categories of Jews from the 50′s and 60′s that have almost wholly changed since then. To illustrate, let’s talk about my niece who is in her first year at Wilfred Laurier University in Waterloo, Ontario. She has attended Chabad for Yom Kippur, Sukkot and Shabbat dinners in the little amount of time she has been in college. Now, if they were to approach her for this survey, she wouldn’t say she is Orthodox because she knows what that is and isn’t there (yet). She certainly is not Reform because she has zero affiliation with that movement. She would probably call herself Conservative given these choices, but that would be bogus because she really does not go to a Conservative synagogue unless there is some sort of simcha/happy occasion like a Bar Mitzvah. However she does attend Chabad more than most Conservative or Reform members attend their respective synagogues and yet there is no Chabad option to check.”

To quote Rabbi Nightingale: whoa, hold on a second. Is he really trying to poke a hole in a professional, scientifically administered, random survey with a story about his niece?

But let’s talk about her for another minute. If a Chabad Jew is like Rabbi Nightingale’s niece, she is someone who likes going to Chabad for Shabbat or holidays, enjoys the Chabad rabbi, and maybe even donates money to pay for the Chabad center that the rabbi established, but she doesn’t necessarily subscribe to Chabad’s version of Orthodoxy.

It’s possible that Rabbi Nightingale’s niece did not check the Conservative box; she might be among the 30 percent of Jews as a whole and 41 percent of Jews ages 18-29 who told Pew researchers that they identify with no denomination. I suggested this possibility to Rabbi Shemtov.

It turns out that I was wrong about that. After I spoke with Rabbi Shemtov, I contacted Gregory Smith, director of religious surveys for the Pew Research Center. He made four points about what Rabbi Nightingale and I got wrong about the Chabad question.

POINT 1: First let’s look at the questions of synagogue attendance and affiliation.  Rabbi Nightingale writes about “the holy grail of membership” and calls it “meaningless.” Smith said the survey did ask about synagogue membership, but did not connect the answers to the data about affiliation.

“Many people who say they are members of a movement say they are not members of a synagogue,” he said. And respondents didn’t have to prove membership in a particular movement, just state which one they identified with.

So the number of synagogues isn’t the issue. The question is how do Jews identify themselves. Which brings us to…

POINT 2: What about Chabad? When they were asked about affiliation, respondents were given as choices Reform, Conservative, Orthodox, other and no denomination. While there was “no Chabad option to check,” as Rabbi Nightingale complained, those who answered “other denomination” were asked which one. Generally they named other smaller specific movements, such as Reconstructionist and Renewal, Smith said.

“Hundreds of people took that approach. They were able to volunteer Chabad” as their affiliation, he said. “Not many did.”

POINT 3: What I got wrong. I thought that Chabad supporters might have fallen into the no denomination category. Smith said that was unlikely. Jews who identify with no denomination are less engaged with Judaism and involved in the Jewish community than those who affiliate, he said.  That doesn’t sound like Rabbi Nightingale’s description of Chabad and Aish people, who “are more actively Jewish than many official ‘members’ of synagogues.”

“We don’t see observant Jews in the no denomination category,” Smith said.

I suspect that Rabbi Nightingale is so down on denominations, not so much because they are “a completely outdated model and mentality,” but because he doesn’t believe in them. Aish is not a denomination. Chabad doesn’t see itself as a denomination. “My denomination is 15 million people,” Rabbi Shemtov told me, meaning the world Jewish population. As they say at Chabad, “A Jew is a Jew is a Jew.”

And so Rabbi Nightingale suggests that a new type of Jew should be added to Orthodox, Reform, Conservative and all the rest: The Chabad Jew. “The Chabad Jew can now become the expansive term for exploring Jew.”

He believes he’s being magnanimous by not offering his organization’s name for what he says will become a generic term, like “Kleenex.” But Rabbi Nightingale’s view is actually quite blinkered. He doesn’t consider that there are exploring Jews within the Reform, Conservative and other non-Orthodox streams.

And he is condescending toward non-Orthodox Judaism and Jews outside his world. He says his niece “wouldn’t say she is Orthodox because she knows what that is and isn’t there (yet),” as though Judaism is a subway and Orthodoxy is the only final destination.

And, he writes, his niece attends “Chabad more than most Conservative or Reform members attend their respective synagogues.” The Conservative  movement contains “bogus” Conservative Jews who don’t meet an unspecified threshold of attendance.

Unlike the Pew survey, Rabbi Nightingale offers no numbers and no method for his conclusions. Which leads to…

POINT 4: Rabbi Nightingale contends that, according to the study, Jews who attend Aish and Chabad services and classes “would be categorized as ‘just Jewish,’ which according to this survey implies failed Jew.”

Smith said it is “false” that the survey implies that people with no denomination are failed Jews. “It is not our place to make that kind of judgment about Jews or any other group. What the survey shows is that being Jewish means many different things to many different people.”

There’s a short thread on Reddit about “I Am Chabad.” Most of the writers agreed with Rabbi Nightingale in general:

“I don’t necessarily see the value in creating a separate Chabad category, but he does have a point that it would be nice to survey where people go, not just where they belong or what they identify with,” papermagelingperpetually wrote.

While he overstates his case (especially with regard to the size of Chabad), the basic point he is making is valid, in that the survey fails to address much of what is happening in the religious Jewish world, and that there are many people who are deeply connected to religion but are, for various reasons, only minimally affiliated in a formal sense. The question is how statistically significant these people really are. I mean, yes, at any given moment there is always a population of “exploring Jews”, however, “exploring” is usually not a permanent state, and most people eventually settle down in a specific community.

intrepidone66 may have been reacting to Rabbi Nightingale’s branding of Chabad when writing, “I’ll have my Chabad toasted and with Garlic & Chive Cream Cheese, oh and a Medium Coffee please.”

The Chabad Question is a good one. Where are all those people who go to Chabad centers? Why didn’t they identify with Chabad when given the chance?

Perhaps Chabad could undertake a demographic study in search of answers. I know some people who would do a good job with it.

What’s a Jew for?

When a Torah scroll falls