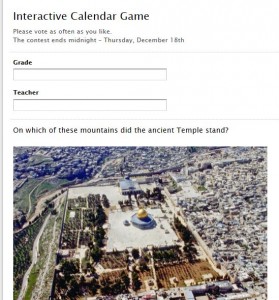 Kids are always being told to put away their smartphones in class. It’s the 21st-century equivalent of making them spit out their gum.

But the religious school at Congregation Beth El of Montgomery County in Bethesda is taking the opposite approach – encouraging students to bring their phones to school.

“There’s a growing movement to have them utilize their cellphones,” says Rabbi Mark Levine, the Conservative congregation’s education director. “They’re carrying around a computer in their pocket.”

Beth El’s religious school has 550 kids in kindergarten through 10th grade. Levine is starting small with two informal learning activities that use a cellphone. “Israel is a priority this year, so most
activities and quizzes will be about Israel.”

In one, students view photos of two mountains (they’re posted on a school wall, old-school style) and are asked on which was the site of the ancient temple. The school provides the kids a QR bar code, which they can scan with their phone and which will take them to a Web page where they can vote. Students without smartphones can receive the Web address of the quiz to access on a computer.

After voting, students will receive an email with links to more information on the sites shown in the photos. Students and their families can vote as often as they would like. Levine said the activity
is geared to grades 3-7. The class that gets the most right answers will receive a prize.

He posted the contest before Thanksgiving and has received 100 votes so far. The contest closes Dec. 18.

The second activity is a personality quiz emphasizing the Jewish value of sameach b’chelko, or “personal satisfaction.” Students use their phone to access the quiz.
Beth El offers online learning in two additional ways. Shalom Learning is an option in which students meet with a teacher for an online class. Twenty-eight students use this option, Levine says.

The school is in the second year of using the Behrman House Online Learning Center for grades 1-5. The center uses textbooks to teach Hebrew. There is an online component to reinforce what the students are learning,” Levine says.

“Kids love digital games,” he adds. “The Online Learning Center is using gaming in a more sophisticated way. The online games that supplement the textbooks capitalize on the ability of digital games to capture the attention and imagination of students.”