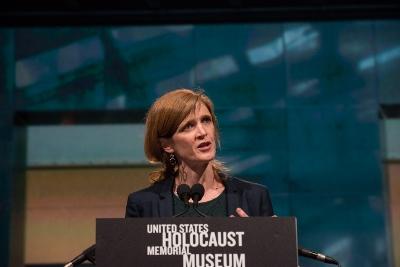 U.S. Ambassador to the United Nations Samantha Power used a speech at the U.S. Holocaust Memorial Museum last week to call for Americans to confront injustice and genocide throughout the world.

“We must confront the problem at its roots by taking a stand against all crimes of hate, all violations of human rights, and every assault on personal dignity,” said Power aid. “It doesn’t matter whether the victim of persecution is a Christian in Egypt, a Roma in Europe, a Muslim in Burma, a gay or lesbian in Uganda, or even a visitor to a Jewish community center in Kansas.”

Power was the keynote speaker at the museum’s National Tribute benefit dinner on April 30. The dinner’s theme focused on taking lessons from the Holocaust and the Rwandan genocide in the 1990s and using them to prevent further mass killings.  But there was an acknowledgement that the world is far from eradicating genocide.

During her speech, Power mentioned the Syrian civil war, and the killing of civilians by the regime of Bashar al-Assad.

“President Assad is deliberately targeting his own people, using indiscriminate air attacks, introducing the world to barrel bombs, denying civilians food in starvation campaigns, and practicing systematic industrial torture – all this to force the Syrian people to submit to his will,” said Power. “It is no secret that the international community’s efforts have fallen short, but we must not give up on pushing for a resolution of this crisis and an end to this killing.”

Power said that President Barack Obama had made “prevention of mass atrocities a core national security priority” and urged other nations to take make a commitment to take the same “practical action that the U.S. has undertaken.”

“We must stress accountability that is neither collective or delayed, but individual and certain,” said Power. “Our goal should be to persuade anyone plotting to commit mass atrocities that the result of pursuing that path would not be the destruction of the other, but instead will be the denial of his own life’s ambitions.”

Dallaire acted in defiance of multiple orders from U.N. Secretary General Kofi Anan to pull out due to warnings that they too would be targeted by the militias.

After receiving his award, Dallaire challenged the world to back up its support for human rights with action.

“Are we not nurturing, sometimes, a hypocritical position of human rights meaning all humans are human and equal?” Dallaire asked.

He said there is a de facto hierarchy that places in the lives of sub-Saharan Africans below those who live elsewhere. He also pointed to instances, including Rwanda, when the West turned a blind eye.

“Maybe [human rights is] a tool that we can refer to, but do we truly believe in it?” Dallaire continued. “Are we prepared for the tears and the sweat and sometimes even the blood of our youth to engage in not only stopping these catastrophes but even attempting to prevent them?”

“Like the Holocaust, [the Rwandan genocide] was preventable,” said William Levine, national co-chair of the museum’s “Never Again: What You Do Matters” campaign. “It marked yet another failure of the international community to respond.”