Sukkot is approaching now, and the prospect of additional lavish entertaining looms large. Time to gather our thoughts, and materials, to build and decorate our sukkot, plan and prepare our meals, and maybe plan and prepare some sage Torah thoughts to share with our family and friends as we celebrate together. So, obviously, we should all also begin to evaluate the state of our wine stash for the upcoming months.

If you have any left, it is time to drink up all those young roses and other lighter summery wines. For this is the season, now, of deeper, more complex whites and reds — the kind that have been resting in our dusty cellars (for those who have such) — that taste so much better as the days get shorter. After all, the fall brings cooler weather and the concomitant seasonal produce like squash, pumpkin, various root vegetables and the like. As our seasonal dishes are generally more robust than in summer, our wines should follow suit. But the transition can, and probably should, be gradual — no need to jump right in with big, bold and heavy wines.

The Ramot Naftaly Shiraz 2010 displays the typical black and red fruit aromas and flavors associated with this varietal which persist and expand while sitting in the glass. Accented with earth, smoked meats and spice within a medium-bodied frame accompanied by cedar and a bit of mint, it is intriguing but not overly complex and a terrific transition wine for the last portion of the holiday season.

The Ramot Naftaly winery is the only kosher establishment among the four wineries that exist in Moshav Ramot Naftaly located in the Kedesh Valley of the Upper Galilee. Their portfolio includes “Duet,” a blend of cabernet sauvignon and merlot, as well as single varietal bottlings of malbec, merlot, cabernet sauvignon, petit verdot and barbera. Owner Yitzhak Cohen was the first to plant barbera grapes in Israel. Founded in 2003, the winery has been steadily expanding production and distribution of its very appealing wines. The winery co-hosts the moshav’s annual blues festival and opened a visitors center in 2009 which, along with their delicious wines, makes it one of Israel’s wineries certainly worth visiting.

Spirits-wise, with the days getting shorter, and the cold winds beginning to blow, we thought folks might like to contemplate something a little warm and cozy — without us jumping right into the heavy hooch. For an elegant and enjoyable change of pace, we thought we’d once again reconsider a fine premium calvados like the Boulard Grand Solage VSOP ($50) at the young end, or even, moving up the price and age scale, the Boulard Calvados XO de Boulard ($110), or if price is no object, the Boulard Millesime 1985 ($280). 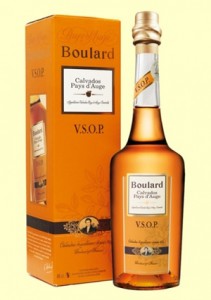 Calvados is basically apple brandy, or distilled hard apple cider, made in the Normandy region of northwest France. Think of it as the working Frenchman’s cognac – though these days prices are keeping pace with that more luxury-branded, grape-based libation. Family tradition is also essential because, frankly, calvados is a long-term investment game. After you plant your apple orchard, it will likely take at least 10 years before you have sufficient quantities of decent fruit, and then you have to age your calvados for it to show well, often at least 25 years — just to command respectable prices.

Calvados is more often than not semisweet with aromas and flavors of apples and other fruits and spices. A young calvados can be harsh and feisty, like a young whiskey, but, like whiskey, mellows and matures beautifully with barrel aging.

Calvados is generally blended from dozens of different apple varieties and is aged in oak barrels at least two years and often much longer. The apple cider, from which calvados is distilled, can be aged for some time before distillation. Some producers insist that distillation should be delayed until the next September harvest, so that their cider receptacles are left empty for as briefly as possible and the cider gets at least 12 months of age, if not more, before being transformed through distillation.

Boulard Calvados is among the super-premium end of the quality spectrum. Boulard Calvados comes from the famed Pays d’Auge district of Normandy, considered the finest-quality region because of its tradition of quality apples, refinement and double distillation in alembic pot stills. The Boulard Grand Solage VSOP, blended from 4- and 10-year-old oak-aged calvados, is unctuous, heady, yet balanced, bittersweet, with hints of almonds, vanilla, allspice and ginger wrapped in a slightly woody box.

Note that there are some who consider all calvados to be kosher, while others only consider certain brands to be kosher, and some require formal kosher certification. Boulard is officially considered kosher without certification by the Kashruth Authority of the London Beth Din (KLBD), by the Grand Rabbinat du Bas Rhin Beth Din de Strasbourg and by the Consistoire de Paris. As always, those concerned should consult their local or personal kosher food authority.

A.J. Liebling, the longtime New Yorker journalist and famous fresser (read “gourmand”), declared in his 1962 food memoir, Between Meals, that “Calvados … is the best alcohol in the world.” To Liebling, calvados, “the veritable elixir of Eden,” was much better in every respect to cognac, which he considered “precocious and superficial” by comparison, even though “millions of Frenchmen are obtuse enough to prefer cognac.” In his 1958 book Normandy Revisited, Liebling opined that calvados “has a more agreeable bouquet, a warmer touch to the heart, and more outgoing personality than Cognac.”

The list and price of available kosher cognacs makes Liebling hard to argue with on this. Suffice it to say that if a glass of cognac is supposed to conjure up images of a visit with French aristocracy, a glass of calvados reminds one that schmoozing with the hired help is likely to be more diverting. L’Chaim!