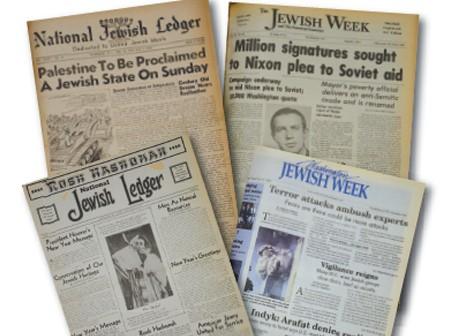 And now a word from President Herbert Hoover:

“I send my cordial greetings to those loyal and devout Jews who are about to celebrate Rosh Hashonah.”

A year after the stock market crash of September 1929 ushered in the Great Depression, the president’s greetings appeared on the front page of the first issue of Washington’s new hometown Jewish paper, the National Jewish Ledger.

For a Jewish community estimated in 1928 as numbering 16,000 people, that praise, however anodyne, must have been heartening. It reflected an acceptance that wasn’t guaranteed in American society. The new eight-page weekly broadsheet that premiered on Sept. 26, 1930 was
another sign of the English language’s ascendency among American Jews and a sign that Washington’s Jewish community was fashioning an identity for itself.

Much of that first issue was filled with New Year greetings and advance praise for the new publishing enterprise, whose editor was listed on later issues as Joseph H. Biben.

Across the page from an ad for Little Tavern Hamburger Shops (“Buy ‘em by the bag”) Rabbi J.T. Loeb of Adas Israel Congregation offered “Enter the National Ledger,” in which he argued that “a true record of events in Jewish life such as may be supplied by the ‘home paper’ becomes particularly essential; on this epochal period of reconstruction and general readjustment in the affairs of the world.”

More than one writer in that first issue was concerned with the unfinished work left by the Great War, which ended a decade earlier and which left Europe a mess, Jewish communities there devastated and many countries slowly slipping into anti-Semitism and fascism.

“We must bear in mind that in many respects the consequences and after-affects [sic] of this war have proven even more horrible…than the actual war conditions,” wrote Felix Warburg, chairman of the Jewish Agency.

“Who is Adolph Hitler?” journalist Bernard Postal asked and tried to answer in a piece on Page 5 which, like the rest of the Ledger’s non-Washington coverage, was provided by the Jewish Telegraphic Agency. Writing after the Nazi party had dramatically increased its representation in the German parliament, Postal said, “there can be no doubt that his new-found political importance
constitutes an imminent danger to the security of German Jewry.”

Relieving unemployment
In the Jewish world of 1930, there was no Holocaust and no Israel. Washington Jews filled their lives with other causes and other worries.

Americans were facing the beginning of the decade-long Depression. Washington, because its main business was government and not industry or trade, was somewhat shielded from the catastrophe. Still, the need was great enough that locals were moved to respond.

A news item (none had bylines in those days) announced that the Amity Club, composed of businesses and businessmen, was uniting with the Jewish Community Center “in relieving the unemployment situation,” although it provided no details about how they would do that.

In November, the Ledger announced that “combined churches” were going to “study unemployment.” It praised the “laymen of the three outstanding religious denominations” – Protestant, Catholic and Jewish – who were involved in the effort. The article provided a long list of participants and the number of adherents to each denomination (Jewish: “over 4,000,000”). But nowhere did the story give a sense of how the destitute could be helped.

For its own part, the Ledger offered the editorial policy of the new paper in its maiden issue:

“It is our aim: —
“To present and interpret the important events affecting Jewish life.
“To record and analyze Jewish achievements of benefits to Jew and non-Jew.
“To familiarize the non-Jewish world with Jewish ideals.
“To create a better understanding between Jew and non-Jew as well as between Jew and Jew.
“To help perpetuate Judaism.”

Although they didn’t acknowledge it, the writers in the first issue knew that American Jews were under scrutiny. The period between the wars had the highest level of anti-Semitism in U.S. history. American Jews were eager to demonstrate to the rest of the country how American they were. Publications like the Ledger aimed to do hasbarah, as a later generation would call public diplomacy, on behalf of the Jewish people.

But the increasing anti-Semitism in the United States had a “chilling effect” on Anglo-Jewish newspapers like the Ledger, historian Jonathan Sarna wrote in a 1995 essay on the North American Jewish press.

“As fear stalked the Jewish community and conditions for Jews domestically and abroad deteriorated, newspapers became frightened of controversy, scandal or of other news that reflected badly on the Jewish people, and they worked all the harder to promote an image of consensus and sobriety, lest they unintentionally play into the hands of Israel’s enemies.”

In that first issue, Frederic William Wile, an author, editorial writer and columnist who, at the time was a political analyst for WRC radio in Washington, counseled that the new publication be “American, rather than purely Jewish.”

“I have never been enamored of the idea of high spotting men or events at Washington or elsewhere in the United States just because they are of Jewish aspect, more or less,” he wrote.

A new awareness
In the second issue, an editorial argued that it was time for Jewish Washington to be put on the map of Jewish America. Among the ways the city should be recognized, the editorial said, is as the site of a Jewish university.

“In the 1930s, the Jewish community in Washington started thinking about itself in a larger way,” said Wendy Turman, director of collections for the Jewish Historical Society of Greater Washington. “There was a new awareness of a community as such.”

Unlike other Jewish communities of the time, Washington was spread out. There were about a dozen synagogues in all four quadrants of the city, plus in Alexandria, Turman said. The 7th Street Corridor, near today’s Chinatown and Verizon Center, was the community’s shopping district. But the focus was moving north toward 14th Street.

This was the time the community was establishing many of its main institutions. In 1924, The Hebrew Home for the Aged had moved into a facility on Spring Road, near what is now the Georgia Avenue/Petworth Metro station. In 1940, what is now the Jewish Social Service Agency, or JSSA, moved next door. The current-day Jewish Community Relations Council of Greater Washington was founded in 1938.

In 1931, H Street resident Anna Shulman founded the Hebrew Sheltering Society.  The group began by renting a room “in a rabbi’s house where penniless men were able to get a kosher meal and a clean place to sleep,” according to a history of the society in the Jewish Historical Society Collection. By 1937, the group had raised enough money to buy a house on Massachusetts Avenue.

Downtown, Mom and Pop stores served shoppers. But the economic situation in Washington must have seemed stable enough to two Jewish businessmen who took a risk and founded a self-service supermarket. The first Giant store, on Georgia Avenue, opened in the middle of a snowstorm in 1936.

The pages of the Ledger reflected the many Jewish organizations that existed then: synagogues and numerous lodges where Jews congregated. The biggest, but not the only, fraternal organization, was B’nai B’rith. The Jewish Community Center was another hub of social life. In its first issue, the Ledger informed readers that the center was “looking forward to a busy fall and winter season. The entire gymnasium, shower rooms and, Health Club Division has been renovated
and painted.”

‘Pabulum for thought’
Reading the Ledger now is like entering an antique store. The language was florid, yet at the same time formal—part H.L. Mencken, part Margaret Dumont.

“Master Albert Carpel,” was described on his bar mitzvah as “robust and bright.” The 13- year-old “has acquitted himself creditably in his excellent reading of the Scriptural portion,” the Ledger recounted.

“Mr. and Mrs. Abe Cohen are on a motor trip to Chicago and will be gone ten days.”

Then there were the worriers: New York journalist Zalmen Yoffeh worried about “the problem of too many synagogues,” what later became known as the “edifice complex.” In his roundup of the 10 best Jewish books of the year, Henry Montor lamented that “the Jew is constantly becoming a less important factor in literature.” While the number of books written by Jews was increasing, they reflect “a gradual loosening of the relationship to Jewish life,” he wrote.

Much of that worry was swept aside a few weeks later. On Oct. 20, the British government issued the Passfield White Paper. It limited Jewish immigration to Palestine, criticized the Zionist organizations there and tilted toward the land’s Arab majority.

The news was reported in the newspaper’s fourth issue on Oct. 24. The following week this headline ran across five columns of page 1:

The main speaker at the meeting Nov. 10 was Zionist leader Jacob de Haas.

“His point of view in this present great crisis will be of moment in acquainting the Jews of Washington with the true fact in this betrayal of trust on the part of the British government,” the Ledger wrote.

At the end of 1930, the Ledger published an editorial arguing that America’s cutoff of immigration, specifically Jewish immigration, was sapping the vitality of the Jewish community. “An examination of Jewish life does not give very much hope for the future,” the editorial read. “Jewish life in gesture, tone and rhythm, are gone.”