It happened that Rabbi Eliezer, Rabbi Yehoshua, Rabbi Elazar ben Azaryah, Rabbi Akiva and Rabbi Tarfon were reclining in B’nai B’rak. They were discussing the Exodus from Egypt all that night, until their students came and told them: “Our Masters! The time has come for reciting the morning Shema!”

At next month’s Passover seder, there it will be again: a terse recollection of some of the earliest rabbis, who found enough in the Passover story to talk about it all night — perhaps as a rebuke to the “are we almost done yet?” crowd.

The fourth name on that list — Rabbi Akiva — is the subject of Barry Holtz’s “Rabbi Akiva: Sage of the Talmud,” the latest installment in Yale’s Jewish Lives series.

What we think of as Judaism today — from the religion practiced by the haredi Orthodox in contemporary B’nai Brak, Israel, to the lack of religion of secular Jews — was created by the rabbis in the centuries following the destruction of the temple in Jerusalem in the year 70.  If there was a quintessential rabbi in the group, says Holtz, a professor of education at the Jewish Theological Seminary of America, that man was Akiva.

“He was the smartest one in the room,” he says.

Holtz has written what he calls an “imagined biography” of Akiva, who lived in the first and second centuries CE.

What we know of Akiva comes from fragments in rabbinic texts. The Babylonian Talmud alone mentions him 1,341 times, Holtz says, and there are hundreds more references in other rabbinic texts. These shards show him to be an unparalleled interpreter of the Torah, a mystic and ultimately a martyr, as well as a man both proud and humble, and capable of touching empathy.

“He’s a complicated person, but there’s a consistency in his personality,” Holtz says.

Holtz does not try to harmonize the inconsistencies — “Was Akiva an unmarried shepherd who begins his studies of Torah for the love of a good woman?” he says. “Or was he already a married man with a young son when, through his own intuition, he discovered the importance of learning? Both traditions can be found in rabbinic literature.”

Instead, he looks at “why the Jewish tradition chose to preserve these tales across the generations.”

That approach, he says, is similar to that of modern scholars who look at the preserved stories of the rabbis as representing the values of the period rather than as historical and biographical facts. And so, without having to confirm dates and places or proving consistency in order to get to the truth of the story, Holtz was able to write his imagined life of Akiva by probing the texts for the truth as the rabbis saw it.

Holtz also reimagines the world of those ancient rabbis and how they transformed a religion centered on temple sacrifices to one focused on prayer and Torah study. The popular understanding is that the Romans destroyed the temple, which was an enormous trauma. “But along came the rabbis who said, ‘now we’re going to have prayer,’” Holtz says.

“All that took a much longer period of time” than is commonly believed. In the meantime, there was “a considerable amount of fragmentation in the Jewish people.”

Akiva belonged to a circle of scholars that traveled through the land of Israel, studying and interpreting the law, disputing one another and forming a tight fraternity. “It was a small group, rather self-enclosed,” Holtz says.

It’s doubtful whether that early circle had much influence on the larger Jewish population. Many of the rabbis were well-to-do and from prominent families. Akiva was not.

Of the several stories on Akiva’s origins, Holtz is partial to what he calls “the Hollywood version,” in which the daughter of a rich man falls in love with the poor, uneducated Akiva. 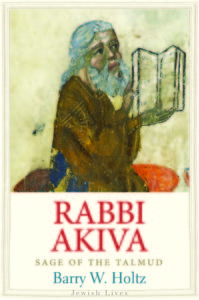 The daughter of Kalba Savua betrothed herself to Rabbi Akiva. When her father heard about it, he vowed that she would not benefit from his wealth. She went and married Akiva. In the winter they slept in a hayloft, and in the morning he picked the straw from her hair. “If only I could,” he said to her. “I would give you a Jerusalem of Gold” — a piece of expensive jewelry.

Akiva left his wife to study Torah. He returned a dozen years later attended by 12,000 students, a sign of the level of his scholarship. His wife did not see him return, but Akiva heard her tell an old man, “If he would listen to me, he would stay another 12 years.”

Akiva realized that she wanted him to study and he had no reason to feel guilty for his long absence. So without reuniting with her, he returned to his studies. A dozen years later, he returned home, this time with 24,000 students.

It’s one of the most-told stories of Akiva, but it confuses modern sensibilities. Says Holtz, “A teenage student of mine heard the story and said, ‘What’s the deal with that?’”

In “Akiva,” Holtz tries to answer his student’s question on many of the confounding stories about the sage.

Holtz found qualities of empathy and tenderness in Akiva and illustrates them as well. Two of the rabbis at the Passover seder in B’nai B’rak, Eliezer and Joshua, were Akiva’s teachers and mentors. Akiva quickly surpassed them in scholarship.

In one story, Rabbi Joshua had been humiliated by the boorish Rabban Gamaliel, the community leader. The two had disputed the date on which Yom Kippur would fall, and Gamaliel ordered Joshua to carry personal objects and spend money on the day that Joshua had calculated Yom Kippur would be, forcing him to publicly “violate his personal principles by disgracing Yom Kippur.”

Akiva came to comfort his teacher by showing how the Torah allows him to accede to Gamaliel’s orders while not violating his own principles. “It is typical of Akiva that he comforts Joshua through the use of text interpretation,” Holtz writes.

Four entered the orchard. While one looked and died, another looked and was stricken, a third looked and cut down the shoots, only Rabbi Akiva “went up in peace and came down in peace.”

This enigmatic story became part of the foundation of the Jewish mystical tradition. In his exploration of the “Orchard Story” or the “Pardes Story” Holtz looks at what the four were doing, and why only Akiva seems to have returned unscathed.

“Akiva,” Holtz writes, “becomes the ultimate model of the Jewish mystic — gaining mystical knowledge and power and seeing the face of the divine.”

He became the model of the Jewish martyr as well, being executed by the Romans for violating a ban on teaching and learning Torah, a policy whose actuality Holtz calls “murky.”

At the hour when Rabbi Akiva was taken out for execution, it was time for the recital of the Shema. Thus while they were combing his flesh with iron combs, he was accepting upon himself the yoke of the kingdom of heaven.

The story is recalled every year in the Yom Kippur liturgy. “That model of the martyr — going to your death with the ‘Shema’ on your lips — that started with him,” Holtz says. Surrounded by his students, “even in his death, he’s teaching.”