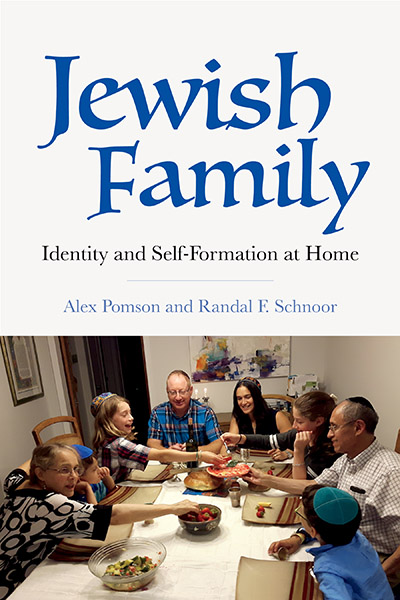 Stop making intermarriage the scapegoat for the demographic difficulties threatening to decimate the North American Jewish community, say the authors of this book, a sociological study of 16 Jewish families.

Intermarriage is “one factor among other structural and relational factors that might be just as significant in shaping the intensity of Jewish life in the home,” they write. “Viewed as an element in a system, intermarriage is less a demographic tsunami, as it is often portrayed, and more an unsettling element in the fragile ecosystem of contemporary Jewry.”

While their take on intermarriage will be seen as contrary to community opinion, the primary takeaway from “Jewish Family: Identity and Self-Formation at Home” is that Jewish identity “is forged at home.”
The study follows 16 families over 10 years. The families all had children in the Paul Penna Jewish Day School in Toronto.

Authors Alex Pomson and Randal F. Schnoor found that their interviewees thought of themselves in terms of their place in their families, as sons and daughters, mothers and fathers, when they spoke about their Jewishness. “Family provides the content and context for their Jewish lives,” they conclude.

As synagogues and schools have become less important to Jews, family ritual — often created by the family itself — is often the main mechanism for transmitting Jewishness to the next generation, according to the two scholars.

It’s not only parents influencing their children, they stress. The lives of the parents also “are shaped by their children’s interests, choices and experiences, and — critically — by the choices they make for their children.”

Interestingly, the children in the study tend to be more comfortable in their Jewish skins — the kids were more confident in their Jewish knowledge and more open in displaying their ethnicity/religion in public — but not one of the teens in the sample said they were committed, or even preferred to marry a Jew.

Ironically, explain the authors, the teens’ confidence in their Jewishness may mean that they believe they can raise their children as proud Jews without having a Jewish mate.

Jewish day schools seem to be the big winners in this study. When children go to Jewish elementary day school, their lives to a certain extent revolve around the Jewish holidays. The kids learn about the rationale for the holy days and the songs and rituals associated with them.

For families that are “firmly Jewish” before the birth of their children, the role of stimuli from their children’s schools is less pronounced. “The richer the culture at home, the less impacted it is by cultural artifacts brought home by the child.”

While the results of the study are impressive, the book is less so. Its strengths and weaknesses are that it is an academic study. The scholars who did the research and wrote the book have a bulldog’s tenacity when it comes to advancing knowledge in their field. But they seem much less concerned with language than with study results.

The book is littered with “academeeze” like “regnant modality,” “human agency,” “problematized” and “morphogenesis.”

Even where theory disappears and the authors focus on their interviews, the prose is not pithy.
None of this should be surprising. After all, scholars are — and should be — rewarded for their research results, not the elegance of their writing style. But it did not make “Jewish Family” a pleasure to read.

Aaron Leibel is a former editor at The Jerusalem Post and Washington Jewish Week.
His novel, “Generations: The Story of a Jewish Family,” which spans 1,500 years and three continents, is available at amazon.com and in Kindle format.