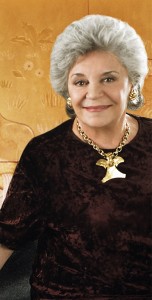 This past August saw the passing of Baroness Philippine de Rothschild, one of the leading lights of the Jewish winemaking and banking family. She was 80 years old. Her father was Jewish, while she and her mother remained Roman Catholic – tragically, yet ironically, her mother was murdered in the Holocaust (the only Rothschild to have died in the Shoah).

In 1988, following the death of her legendary Jewish father Baron Philippe, “the Baroness,” as she was known in the wine world, or simply Madame de Rothschild (her own preference), inherited the ownership and stewardship of the family wine company and its many holdings, including the Premier Cru Classe Chateau Mouton-Rothschild. Under her steady hand, their branch of the family’s winemaking empire was greatly enhanced and expanded. Today the company, Baron Philippe de Rothschild SA, sells 22 million bottles a year.

Madame de Rothschild had a very difficult act to follow, though by all accounts did so brilliantly. Her father, a “world class bon vivant,” was both eccentric and imaginative with a penchant for fast cars, high art and theatre. When he took over the Chateau Mouton Rothschild estate in 1922, he campaigned tirelessly to have its wine classification officially elevated from second tier to first, and succeeded finally in 1973. He was the first in Bordeaux to institute Chateaux proprietary bottling, the first to establish a second label (Mouton Cadet) and create a modern wine brand, the first to sign the wine label as a personal guarantee of quality and the first to participate in a high-profile joint venture in California when he co-founded Opus One with Robert Mondavi. He was the first to understand that the label and packaging of wine was an extension of the image of the wine as a brand, and, in a nod to his love of art, commissioned notable artists every year since 1945 to create his wine labels, including Picasso, Chagall, Dali, Warhol and the Israeli artist Yaakov Agam.

Madam de Rothschild continued this tradition. Once, in 1990, she approached the English artist Francis Bacon to ask about using one of his works that her father had previously rejected. When Bacon inquired after what had changed, Madam de Rothschild replied: “I’m not my father.”

The Baroness Philippine was universally described as vivacious and charismatic with a penchant for oversized jewelry and an equally outsized personality. Born in 1933 of an adulterous affair, her mother Elisabeth Pelletier de Chambure (from a wealthy Catholic aristocratic family) divorced her husband (Jonkheer Marc Edouard Marie de Becker-Remy, a Belgian aristocrat and cousin by marriage to Baron Philippe de Rothschild) in 1934, and promptly married her lover, the Jewish Baron Philippe de Rothschild. In his memoirs, he later described the marriage as passionate but tempestuous, and full of despair. In 1938 they had another child together, a son, born with significant physical deformities who did not survive his first year. They separated in 1939.

After Germany occupied France and her father fled to England to join the Free French Forces and support Gen. Charles de Gaulle, young Philippine stayed with her mother, Elisabeth. Being Catholic, her mother thought they had nothing to fear. Sadly, in 1941, at the age of 10, Philippine witnessed her mother being arrested by the Gestapo and shipped off to the Ravensbruck concentration camp where she perished in 1945. Madame de Rothschild later reflected that watching her mother being dragged away by the Gestapo made her feel that, “I had to fight my way through that nothing was going to be easy.”

She left school at age 16 to become an actress, a career that spanned over 20 years. Then in the 1970s her father enticed her to help with the wine business. Her theatrical background was always an important aspect of her personality and much of her subsequent success when she inherited the wine company in 1988. She tirelessly promoted and improved Mouton by renovating the property, modernizing the winemaking and expanding its bottom line by adding international properties and joint ventures. Her considerable social skills were augmented with a keen business acumen and sense of style that leaves a void in the all too commercial, world of winemaking.

For a while there were kosher bottlings of Mouton Cadet available in the United States, but no longer (they are still sold in Europe and Israel).

So, to toast her memory we suggest a glass of kosher Bordeaux produced by another branch of the family: Barons Edmond and Benjamin de Rothschild Haut Medoc 2011 ($30), a full-bodied blend of merlot and cabernet sauvignon with deep dark cherry and floral aromas that expand nicely in the glass into cassis, dark plum, red cherry and strawberry flavors accented by spice, oak and tobacco notes. L’Chaim.