Two years ago, Cantor Ilana Wolpert and her husband, Lawrence, were anxiously waiting for their son Oren’s surgery to manage his Crohn’s disease to be finished when Rabbi Jonathan Schnitzer came to their hospital waiting room.

As the three chatted, Schnitzer, senior rabbi at B’nai Israel Congregation in Rockville where Wolpert is ritual director, suggested they say the Mi Sheberach prayer for healing.

“I say that prayer every day during services” for others, Wolpert says now. But “suddenly, the tables were turned and I needed it for my son.”

She notes, “He took both of our hands,” recalling “I have never felt so comforted in my life.”

Schnitzer, 68, believes celebrating people’s joys and helping them through challenging times is at the heart of being a congregational rabbi. After 28 years leading the 1,100-family Conservative congregation, he will retire June 30.

“I have the deepest respect for him. I think he really gets human nature after all these years of working with him. I believe his heart is so good and he really understands what it is people need,” Wolpert says.

B’nai Israel will honor Schnitzer on June 8. An endowment, which will fund the senior rabbi position, will also be dedicated in his name. Rabbi Michael Safra will succeed Schnitzer on July 1.

Rabbi Mitchell Berkowitz, formerly a rabbinic intern in Roslyn, N.Y., has been hired as the congregation’s new assistant rabbi.
Schnitzer’s legacy, congregants say, is how he helped his congregants through the years.

“He knows everyone and he makes sure that he connects to people on a personal level,” says Deedee Jacobsohn, who joined B’nai Israel in 2000 and is now the synagogue president. “He is completely integrated into the whole fabric of the congregation.”

In addition, she says, “He is incredibly passionate about what he does, he puts everything that he has into the congregation and people.”

Schnitzer makes a practice of calling congregants who are unable to attend services on Shabbat and Jewish holidays. He maintains a roster of congregants and says it is a way to “be an emotional and spiritual support for them.”

The year leading up to Schnitzer’s retirement has been bittersweet for the congregation, says Jacobsohn, who has been working closely with him. Regardless of what the congregation is doing, she is grateful she could still rely on Schnitzer for emotional support.

“Rabbi Schnitzer has excelled in being a spiritual leader. However, it went way beyond Saturday morning services,” says former congregation President Andrew Schechter. “One of the best times to have Rabbi Schnitzer was at the worst times in your life.”
Schechter says several congregants have experienced the death of child. “In a time of extreme difficulty and sadness, he is the guy you want in your corner.”

As a community leader, Schnitzer is credited with strengthening B’nai Israel as an institution. The synagogue is larger and offers more programs than when Schnitzer arrived in 1989, according to a history of the synagogue written by members.

B’nai Israel Congregation was founded in 1925 on Georgia Avenue in Northwest Washington, and joined the United Synagogue of Conservative Judaism in 1957. The congregation moved to Montrose Road in Rockville in 1976.

The congregation’s building doubled in size following a $15 million capital campaign completed in 2003. The campaign funded the 65,000-square-foot Thelma and Melvin Lenkin Educational and Activities Center, created an endowment that supplements the synagogue’s operating budget and expanded the synagogue’s religious school, Talmud Torah. Schnitzer was key to raising the funds, says Jacobsohn.

Schnitzer also led the congregation through cultural changes. In 2013, the Pew Research Center released its “A Portrait of Jewish Americans.” The report said that “Jewish identity is changing in America, where one-in-five Jews (22 percent) now describe themselves as having no religion.” Schechter credits Schnitzer with helping congregants understand the report’s ramifications. 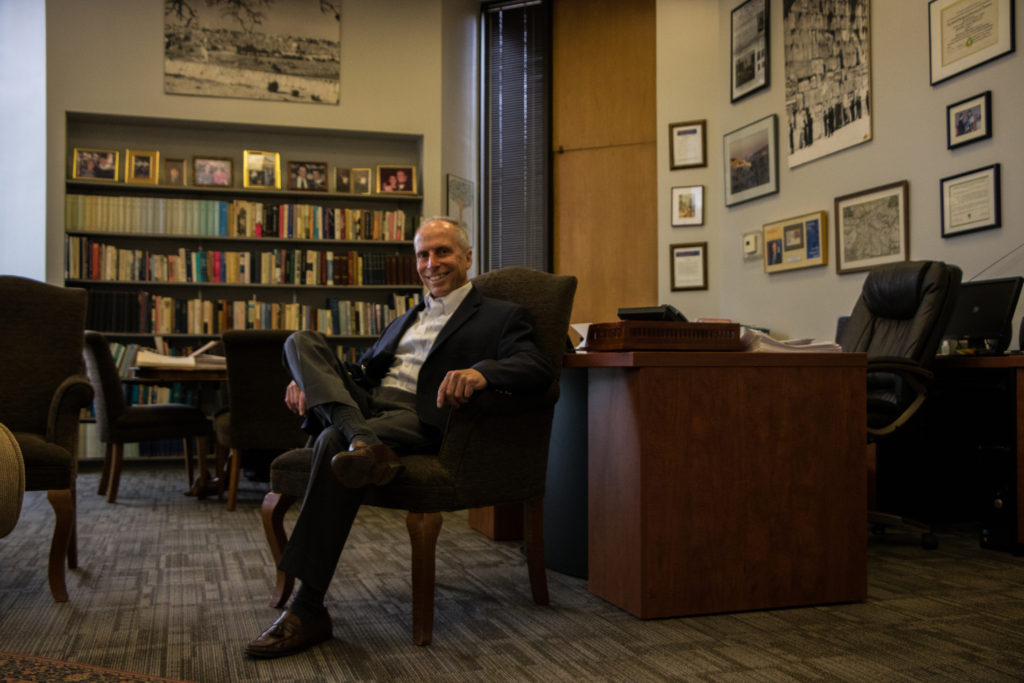 That report “made us open our eyes extremely wide to the changes in the Jewish people,” he says. “Rabbi Schnitzer was able to interpret it, digest it and help us understand, especially the congregational leadership, what we were looking at.”
Schnitzer’s study reflects his personality and his beliefs.

A 19th century English table, which belonged to Schnitzer’s father, is placed near a ceiling-high bookshelf. Two ornate pens are the centerpiece of his desk. “I am so old school that I still write almost everything, at least initially, in long-hand,” he says.

There are dozens of photographs, books and mementos. But his favorite item is a handmade collage with two dolls mounted inside the frame. The artwork was made by a congregant and given to Schnitzer after a congregational trip to Israel. It shows images of Israel, and the dolls have a “J” and “B” written on them — short for Jonathan and Beverly, Schnitzer’s wife. Also inside that frame is Schnitzer’s motto: “The rabbi and his wife are real people.”

He and Beverly joined B’nai Israel in 1989 after he served B’nai Abraham Synagogue in Easton, Pa., for 15 years. He says he is fortunate for the stability of serving only two synagogues.

Schnitzer elaborated on his motto, “We hope that we are down to earth and accessible. We have all of the same emotions, life challenges and experiences that other people do.”

His plans for retirement are evolving, but says he will remain active at B’nai Israel and have an office at the synagogue.

Retirement is “a moment of passage,” he says. “But it’s not a total goodbye.”n