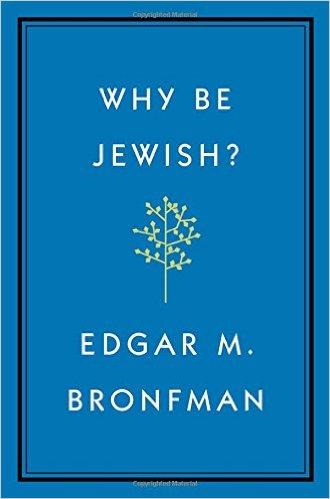 For people perplexed because they identify as Jews but don’t believe in God, Edgar M. Bronfman, who died in 2013, has produced a small, modern guide.

In Why Be Jewish, Bronfman, former head of Seagram Co., says he does not believe in a deity. Yet he was a world Jewish leader and philanthropist who, nearing 60, reconnected with Judaism, studying Torah and Talmud.

Perhaps the title of this, his sixth book, could be the second half of a question: If you don’t believe in God, why be Jewish?

Well, why not? “Judaism does not demand belief,” Bronfman says. “Instead, it asks us to practice intensive behaviors whose purpose is to perfect ourselves and the world.”

He says: “Judaism remains an immensely rich enterprise,” one that “has deep roots and provides essential nourishment.” Also: “Judaism emphasizes the here and now, and what Einstein called Judaism’s ‘almost fanatical love of justice’ reflects this orientation.”

And one more reason, distinct from Christianity: “Judaism is not concerned with saving souls for heaven but with saving lives on earth.”

Those good reasons weren’t always apparent to him.

“As a young man, I walked away from my rudimentary practice of Judaism. Throughout much of my adult life I spurned religious practice and raised my children in a home where Judaism was almost entirely absent,” and gave them no basic Jewish education. He didn’t object when his first wife, an American Jew of assimilated German background, celebrated Christmas with a tree, fireplace stockings and presents.

So what changed? First was seeing Moscow Jews celebrating Simchat Torah in the 1970s and wondering: “What is it about Judaism,” harshly suppressed in the USSR, “that had kept it alive when so many other civilizations have disappeared?” Flying home with Rabbi Israel Singer, he asked what Singer was reading and learned of Judaism’s instructions about an ox that gores. Bronfman realized “that my distant ancestors were exploring systems of justice and equitable distribution” millennia before modern law.

Singer became his deputy after Bronfman became head of the World Jewish Congress in 1979.

In 1994, Bronfman married Jan Aronson, who wanted a Jewish home, starting with Shabbat candles and with wine for which he said the blessing. As his Jewish interest and knowledge increased, he recognized the need for wider, deeper Jewish education. He funded Hillel, the Samuel Bronfman Foundation, the Bronfman Youth Fellowships and the interdenominational My Jewish Learning.com.

Bronfman was 84 when he died, the age at which he wrote this book, the aim of which “is to encourage others to take another look at their tradition and craft a practice of their own, one that need not include belief in a traditional God,” he says.

In a foreword, Rabbi Angela Buchdahl, a former Bronfman fellow, says Bronfman chooses 12 “‘secular tenants’ of Judaism that would compel a rational yet spiritually seeking young Jew to engage in Jewish life.”

Why be Jewish is engaging and easy reading. Its discussions include relevant Torah and Talmud quotations applicable in our time or any. Suggesting ways to find modern meaning in Jewish holidays, he explains a bit too much for those with a basic Jewish education, but he provides interesting ideas, for example: Chanukah as a Jewish civil war, a tale of why Rosh Hashanah includes 100 shofar blasts, and Tu B’Shevat as a lesson in ecology and conservation. Jews had an “environmental ethos long before our planet was in such a degraded state,” he says, citing rules about fruit trees, ethical treatment of animals and a year of rest for fields.

He calls Passover central to Judaism, and the Exodus narrative “unique, as it asserts that the condition of freedom is inextricably linked to the practice of moral responsibilities.”

A particularly lovely touch for election year from this “nontheistic Jew” who helped lead the struggle to free Soviet Jews is viewing seder candles as a reminder of the importance of keeping alive “the fragile flame of freedom.”