Ronna Farley has been cooking with Manischewitz for as long as she can remember. The Rockville resident says that numerous Manischewitz products are a cooking staple in her kitchen.

One of her latest creations, beef tenderloin puffs, has landed her a spot in the 2014 Manischewitz All-Star Cook-Off, which will be held March 27 at the Jewish Community Center in New York City. The finals come with a $25,000 grand prize package.

Farley talked to WJW about her cook-off expectations, favorite dishes and what she’ll do with her winnings.

On why she chose beef tenderloin puffs
When Farley was a finalist in 2012, she made a recipe using Manischewitz chicken broth and puff pastry squares. This time, she decided to use beef broth and pastry puffs.

“I wanted to go all out,” she says. “I’m much more excited about this one than the last. I like the taste and the way it presents. It presents really pretty because of the puff pastry top.”

On her day job benefits
Farley has been a grocery store cashier at the Giant in Aspen Hill for 29 years. Her position has given her the opportunity to come up with many new recipe ideas. “[Many times] I’ll see what people buy and a light bulb goes of in my head.”

On her confidence going into the cook-off, and what she’ll do with the winnings
“I think this recipe is awesome,” she says, noting that she cooked the fairly easy creation earlier this week in under an hour. Last time, she says, she got overly excited during the competition. This time, she’ll keep her cool.

“As far as the money goes, we have a lot of house-type repairs we’d do first,” she says. “I’d probably treat myself to a little something special.”

Check out Farley’s recipe below: 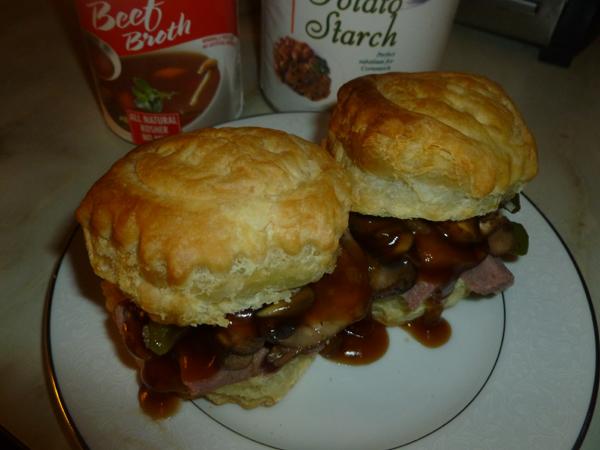 1. Preheat oven to 425 degrees F. Separate pastry shells and place on an ungreased cookie sheet. Bake 18 to 20 minutes until golden brown and puffed. Cool. Cut each across center.

2. In a medium sauce pan, combine beef broth, cola and onion soup mix. Whisk in potato starch. Cook and stir over medium heat until mixture comes to a boil and thickens. Keep warm over low heat.

3. Heat olive oil over medium high heat into a 10-inch non-stick skillet. Add tenderloin. Cook 4 minutes on each side or until desired doneness is reached. Remove tenderloin and set aside.

4. Add mushrooms and green pepper strips to the same pan. Cook and stir over medium heat for 2 minutes. Remove from heat. Cut tenderloin into 1-inch strips.