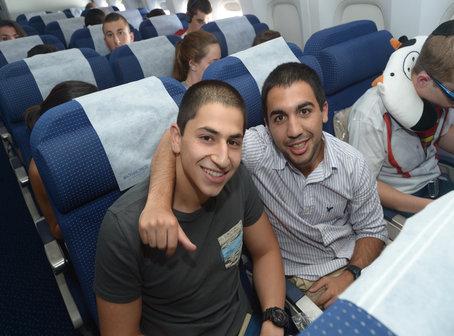 JERUSALEM — Former Rockville residents Ido Balely and Eyal Nave are headed to the Israeli army. Such a prospect would make most people apprehensive, all the more so when recent casualties have underscored the risks that Israel’s soldiers face in battle.

But on Monday, as they flew high above the Atlantic Ocean on their way to immigrate to Israel, neither Balely, 18, nor Nave, 20, expressed any fear.

If anything, the recent deaths of Max Steinberg of Los Angeles and Sean Carmeli of South Padre Island, Texas, who died in the fighting in Israel’s Operation Protective Edge, have made the two Marylanders more determined than ever to make aliyah and contribute to the Jewish state’s defense.

“If people don’t join, then where would Israel be?” said Balely, who just graduated from Walter Johnson High School in Bethesda, during an El Al flight of 228 new immigrants to Israel chartered by Nefesh B’Nefesh.

Nave, a graduate of Wootton High School in Rockville, nodded in agreement from his adjoining seat.

“Years ago, I told all my friends that I was going to join the army, and now I am,” he said. As participants in the Garin Tzabar program of the Israel Defense Forces, the two will take courses at kibbutzim before being drafted.

On Monday’s flight, there were several other immigrants who, like Balely and Nave, would be classified as “lone soldiers” because they will serve without having their parents in Israel. But the Nefesh B’Nefesh flight, the organization’s 51st such chartered flight, was more about the young families making aliyah.

Known as “the children’s flight,” the Boeing 777 carried 100 children, the youngest of whom was 3 months old. Their high-pitched voices sang “Hatikvah,” the Israeli national anthem, during a ceremony in New York before departure and their presence drew Jewish Agency Chairman Natan Sharansky to speak optimistically of the future during a welcoming ceremony in Israel that had been reduced in size because of security concerns.

Rabbi Shmuel Jablon said he and his wife Becky were moving their family from Philadelphia to Efrat for their five children, ages 8 months to 17 years, and to fulfill a lifelong dream.

“After so many years of us speaking Hebrew to the kids, we figured that 2,000 years of exile is enough,” said Rabbi Jablon. “It’s time to come home.”

His 9-year-old son Akiva was less philosophical, saying that he was looking forward to the little league baseball in Efrat – a community of more than 9,000 people in the Judean Mountains of the West Bank.

But he looked up from his iPad game (also baseball) to admit that he was “very excited.” His eldest sister, Leah, said that she saw in her family’s move a message to Jewish people everywhere. “If there’s something holding them back” from making aliyah, “if they’re nervous about missing out on opportunities in America,” she said, “they should know that Israel really is the land of opportunities.”

At the ceremony at Ben-Gurion Airport, Tel Aviv Chief Rabbi Yisrael Meir Lau told the new immigrants that while each individual was in Israel for different reasons, the fact that a planeload of Americans moved to the Jewish state in the midst of a war was more than inspirational: It was emblematic of a defiant spirit in the face of Israel’s enemies.

“You are the eternal answer,” he said,” to those who deny the eternal right of Jews to stay in their homeland.”