Choreographer Roni Koresh makes dances that don’t look like anyone else’s. His artistic voice is a singular one and if you spend even a few moments speaking with him, you realize he draws his inspiration from his own heart-felt experiences. Next weekend, the Koresh Dance Company makes its Washington debut in a program featuring short pieces and excerpts from Koresh’s recent work. The March 21 and 22 performances at the Harman Center’s Lansburgh Theatre are sponsored by Bethesda’s CityDance Conservatory and the stalwart Washington Performing Arts Society.

A self-described shy youngster, Koresh grew up in the then small town of Yehud, outside of Tel Aviv. His mother was an avid Israeli folk dancer, though it wasn’t until his teenage years that Koresh began to explore dance, and then it was only to look good at social gatherings during the peak of the disco period. During his army service, Koresh stayed close to home, which enabled him to continue with his dance studies and even perform on occasion.

Soon after his army service, he set off with a few friends for New York, the dance capital, where he enrolled as an international student at the rigorous Alvin Ailey dance studio. Realizing there would be no place for him in the company, Koresh moved to Philadelphia, where he danced with an Israeli modern and jazz choreographer.

In 1991, when he founded his company in Philly, Koresh recalled feeling like an outsider. But these days, the troupe garners critical acclaim and invitations to perform around the U.S. and abroad, and Koresh has come into his own.

So has contemporary and modern dance from Israel.

In recent years, Israel’s dance companies and Israeli choreographers have been in demand on opera house stages throughout Europe, North America, the Far East and beyond. In the modern dance world, Israel has a certain cachet and promoters and audiences are hungry for the latest work coming out of Tel Aviv, Jerusalem and beyond.

Koresh pointed out that Israel’s modern dance history is a long and illustrious one, with some deep connections to the most influential 20th-century American choreographers. One of modern dance’s primogenitors, Martha Graham, was brought in as the Batsheva Dance Company’s first artistic adviser in 1964, when Baroness Batsheva de Rothschild provided the seed money for what is now Israel’s most prominent dance company.

What, though, makes Israeli dance so compelling? Koresh has a few ideas.

“You’ll find with a lot of Israeli choreographers [that] you can feel their voice,” he said. “It’s physical. And because Israelis are a very opinionated people, they have very strong opinions. They are aware that life is not guaranteed tomorrow, so you want to be significant; you want to be an individual; you want to have a voice and not be like everybody else.” This, he said, imbues Israeli contemporary dance with a distinctive intensity. The dancers, physically exquisite, often dance as if their lives depend on it.

Koresh noted that Graham-trained Israeli choreographer Ohad Naharin, who now directs and choreographs for Batsheva, has been a major influence within the Jewish state and worldwide. His invented approach to movement, which he calls gaga, draws dancers from every continent to the Batsheva studios in Tel Aviv’s Neve Tzedek.

Koresh, though, no longer calls himself an Israeli choreographer. “I am definitely an American dance company,” he insisted. “But I am an American choreographer with very strong roots to Israel. I don’t find that limiting yourself to one specific cultural environment can be helpful. Of course, first and foremost, I’m an Israeli. I was born there. My cultural sculpting was in Israel. But then when I came to the States, I grew. I’m proud to be an American and working here with my company.”

At the company’s District debut, the program will include a smorgasbord of works, with the dancers performing to Beethoven’s “Moonlight” Sonata, Bach’s Air on a String and Middle Eastern rhythms from Lebanese DJ Nader. Opening the evening will be selected students from CityDance Conservatory dancing an excerpt from Koresh’s “Standing in Tears.”

The piece, Koresh said, “is a very good representation of dance in Israel because it has that cynicism, sarcasm, humor and toughness at the same time, all in one. It’s really about that shifting of moods.” He de-scribed how the mostly high-school-aged dancers must very quickly shift their moods within eight brief counts. “One second you look at them in awe, the next second you’re kind of disturbed, then the next second you’re smiling and you don’t even know why,” said Koresh.

His pieces are engaging, passionate, raw and emotionally rich. “I don’t really do narrative work,” he said, “I do content work. You’ll find the content of emotional complexities within a human being.” His work is a representation of his artist temperament. He hopes audiences will find it genuine, and at its heart is an essential Israeliness. “I grew up in a cultural melting pot, and it was a very direct environment,” said Koresh, “but yet there was a celebration of life, constantly, a constant celebration of life.”

Lisa Traiger will moderate a post-show discussion with the company artistic director. 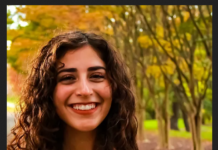 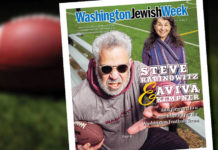