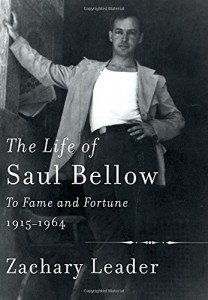 The author Saul Bellow loomed over the mid-to late 20th century American literary firmament like a colossus, the winner of three National Book Awards, a Pulitzer Prize and, in 1976 the ultimate accolade, the Nobel Prize for Literature. This new biography, covering the first half of his life, is suitably massive weighing in at 650 pages, not including the notes and index.

Zachary Leader conclusively shows us that Bellow’s life was also his subject. Characters from his family, his childhood, friends, colleagues and rivals regularly show up in his novels and short stories again and again. His elder brother, Maury, to give one example, appears as Shura in Herzog, as Albert in Something to Remember Me By, as Simon in The Adventures of Augie March, as Philip in Him with His Foot in His Mouth and as Julius in Humboldt’s Gift. There are many other examples. And Bellow was not above using his gift to extract revenge on those he believed had wronged him. Bitterly wounded by the infidelity of his second wife, Sasha, Bellow took revenge on her and her lover through his depictions of them in Herzog.

Bellow seemed to have sensed early, before he had published a word, that he had a seed of literary greatness within him. But it took some time to emerge. He seems always to have had an acute gift for observation, but it was perhaps not until the first, ringing sentences of The Adventures of Augie March that the world became aware that a new talent, speaking with a powerful, original and totally fresh voice, had emerged.

“I am an American, Chicago born — Chicago, that somber city — and go at things as I have taught myself, free-style, and will make the record in my own way: first to knock, first admitted; sometimes an innocent knock, sometimes a not so innocent. But a man’s character is his fate, says Heraclitus, and in the end there isn’t any way to disguise the nature of the knocks by acoustical work on the door or gloving the knuckles.”

That voice — insistent, unapologetically both Jewish and American — came from somewhere deep within Bellow. As Leader notes, Bellow seemed at ease with his Jewishness and his Jewishness seemed the source of his ease. His contemporary, the writer and critic Alfred Kazin, wrote of Bellow: “He was proud in a laconic way like an old Jew who feels himself closer to God than anybody else.”

In his first published novel, Dangling Man, Bellow took aim at the dominant Waspish protagonists of American literature, typified by the repressed, macho heroes created by Hemingway. “Do you have feelings?,” says Bellow’s narrator. “There are correct and incorrect ways of indicating them. Do you have an inner life? It is nobody’s business but your own. Do you have emotions? Strangle them … To hell with that! I intend to talk about mine, and if I had as many mouths as Siva has arms and kept going all the time, I still could not do myself justice.”

Unlike Augie, Bellow was not born in Chicago but in Lachine, near Montreal, and his family later moved into the heart of the cramped, crowded city. His father, a smalltime bootlegger, found it expedient to get out of town when Bellow was 8 and smuggled the family to Chicago.

In this book of inordinate length, there is time to examine minutely every member of the extended family. Leader traces as well Bellow’s career through studies at the University of Chicago, Northwestern and his postgraduate studies in anthropology at the University of Wisconsin. We move through the author’s initial struggles to publish; his first, second and third marriages and various affairs, friendships, rivalries and overseas trips. We see how everything that Bellow experienced became grist for his writing.

Leader is very effective at explaining how incidents in Bellow’s life are transformed into art. He is less successful at painting a true, living picture of Bellow as a person. Despite the hundreds of letters quoted, interviews cited and testimonies mined, Bellow comes across as an abstraction. Ironically, the novelist who excelled in giving powerful and authentic life to his creations emerges at the hands of his biographer as a pale, elusive figure. This is surely a disservice to a man, who whatever his failings, was truly bursting with life.

Scholars and students of Bellow will surely treasure this biography as the most exhaustive record of the author’s life that will ever be produced and will wait impatiently for the second volume describing the remaining 41 years of his life. The rest of us could do well to pick up one of the novels — I’d suggest Augie March — to remind ourselves of what a vibrant and compelling voice Bellow possessed and shared with the world.