Israel’s self-described interim solution covering where and how women can pray at the Western Wall hasn’t stopped Jews from all sides of the issue from wanting to hit their heads against a wall.

A 4,840-square-foot platform designed to accommodate up to 450 worshippers at a time was just installed. The new prayer plaza, connected by a ramp to an existing platform in the southern section of the Wall near Robinson’s Arch, is called Azarat Yisrael and is being billed as an interim but primary place of worship for egalitarian and pluralistic prayer services.

The existing prayer plaza at the Wall, north of the Mughrabi Bridge, is the official prayer site and is designated for Orthodox services. 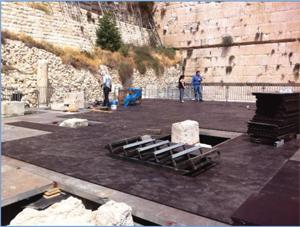 The new plaza, south of the Mughrabi Bridge, is in the area already approved for pluralistic prayer by the Israeli High Court of Justice. It will be opened 24 hours a day, seven days a week, and Torah scrolls, prayer books and prayer shawls will be available to all. However, weddings, circumcision ceremonies or charity collections will not be permitted at the site.

“The Kotel belongs to all Jews no matter who they are and what stream of Judaism they come from,” Ministry of Jerusalem and Diaspora Affairs Minister Naftali Bennett said Sunday as he announced the new platform.

Bennett said the platform was built in conjunction with the offices of Prime Minister Benjamin Netanyahu and Jewish Agency Chairman Natan Sharansky, who is expected to announce a permanent solution any day now.

Immediately after details of the platform were announced, a clarification was issued by Netanyahu’s office that stated, “Contrary to reports, there is no new government decision regarding prayer arrangements at the Western Wall. The committee appointed by the Prime Minister to look into the matter, has yet to conclude its work. Once it does so, it will submit its recommendations to the Prime Minister.”

That clarification didn’t stop anyone from having a strong comment on the platform, which “literally sort of appeared under our feet,” said Rabbi Julie Schonfeld, executive vice president of the Rabbinical Assembly.

While calling the platform “a modest first step” forward in resolving the issue, Schonfeld said she is still awaiting clarification on who will oversee religious practices at that space and what the final terms regarding issues of equality will be.

Masorti, Israel’s Conservative movement, has gathered and prayed at the upper plaza of the Wall since 1980 and was given the option of worshipping at Robinson’s Arch in 2000. Meanwhile, it has continued to work with the Israeli government to expand the prayer area, hours, staffing and provisions for ritual needs at that site.

Women of the Wall, a group formed 20 years ago with the goal of allowing women to pray at the Western Wall wearing ritual garb and with the Torah, condemned the latest changes by Robinson’s Arch, noting in a statement the government is relegating “over 50 percent of the Jewish population to the ‘back of the bus.’ ”

“The plan will effectively exile women and all Jews who pray in a way that is not ultra-Orthodox” to Robinson’s Arch and away from the actual Wall, Women of the Wall declared.

“What has been proven today is that the bullies were victorious — with their assault, spitting and cursing at women,” the statement continued. “This plan is the very definition of separate, and not nearly close to equal, it provides an out-of-sight, out-of-mind solution silencing women at the Western Wall.”

Virginia Spatz, a co-organizer of the Washington Friends of Women of the Wall, called the recent changes “disappointing. I had hoped that the strains of Judaism could come together in unity, and this is certainly not that. This is just heartbreaking.”

Spatz questioned how Bennett could say that the Wall belongs to all Jews and then “in the next breath” propose a solution “that regulates many Jews to a site apart from the Kotel” and keeps the Kotel for “official recognition as a prayer site to be used solely for Orthodox services.”

“These are incompatible statements, and the logic of them escapes me. The new plan is a severe slap to Jews with pluralist visions and an insult to the millions of Jews, like me, who do not express their Judaism through a particular kind of orthodoxy,” she said. While the new platform was proposed as a temporary solution, Spatz said she believed it will only make it harder to come up with a true compromise in the future.

Rabbi Tamara Miller of Washington Friends of the Wall also was disappointed. “The point of it is that the women from Orthodox to Reform and everything in between, the women want to be able to pray together at the Wall,” she said, adding that Bennett’s plan “does not allow this to happen. The women want to be together. It’s not about praying with men,” she said.

Linda Yitzchak, who also is active with Washington Friends of the Wall, described herself as a Conservative Jew who enjoys celebrating Rosh Chodesh with women, calling it a very special experience for her.

“This alternative does not help with that at all,” she said, noting that the new platform “looks terrible. It’s not inviting.”

The Reform movement called Bennett’s plan “a gesture of goodwill, but it is, at best, a very small step forward in the implementation of the full plan.”

According to its statement, the Reform movement believes, “The Kotel is a powerful symbol of the Jewish yearning for Israel and for the unity of the Jewish people. As such, it needs to be open and free to all Jews; women and men must be treated equally there.”

If the Bennett plan becomes a final solution, “it would create a painful and unnecessary conflict within the Jewish people.”

Not all women are in favor of creating a more open Western Wall. Women For the Wall, a grassroots movement that says it favors respectful and dignified prayer at the Wall, believes that classical Jewish practice at the Wall must be preserved.

“A holy site is not the place for political activity,” it declared in a statement to Washington Jewish Week.

“Jerusalem is not Selma, and this issue cannot be compared to the fight for civil rights in the U.S.,” said Ronit Peskin, co-founder of Women For the Wall.

“WOW views the Kotel as an opportunity, and lacks reverence for the place held sacred by millions of Jews around the world,” noted Leah Aharoni, co-founder of Women For the Wall. “This political protest shows that they do not understand what it means to respect the sanctity of the place.”

“The Kotel must transcend politics. We call on the leaders of the liberal Jewish community to condemn the use of the Kotel as a place of political theater,” Peskin said, suggesting that Women of the Wall should take their case to the Knesset rather than the Wall.

Women For the Wall urged “our cherished sisters” not “to continue to pray at the back of the plaza and then complain to the media about your ‘exile.’ ”

Legally, as of April, women have the right to wear tallitot while praying in the women’s section of the Wall. Since 2010, the rabbi in charge of the Wall has forbidden anyone entering the women’s area to carry a Torah.

Sharansky, meanwhile, has promised to release his plan for a compromise in the very near future. His plan, first reported on in April, includes the expansion of the egalitarian section at Robinson’s Arch with a unified entrance to be built. Like Bennett’s plan, the area would be open at all times rather than for a few hours a day, as it had been prior to Sunday.

That section would be overseen by a joint commission of the Israeli government, Sharansky’s Jewish Agency and representatives from world Jewry.

You Should Know… Noah Hoch