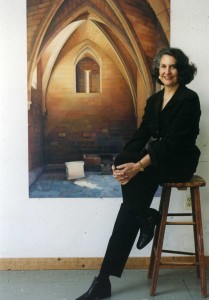 On March 3, Sherry Zvares Sanabria of Leesburg. Sanabria was a Washington-area artist whose work was included in 40 solo exhibitions and more than 50 group exhibitions housed in venues along the east coast. These included the Ellis Island Immigration Museum, the American Institute of Architects, the American Academy of Arts and Letters, the Weinstein JCC, the Hoorn-Ashby Gallery and the Corcoran Gallery.

A Washington, D.C., native, Sanabria was a 1955 graduate of Coolidge High School and a 1959 graduate of George Washington University. She received her master’s of fine arts degree from American University in 1974, and had her first solo exhibition featured at The Phillips Collection in the District in 1980.

Di Cook of Leesburg, who owns Sanabria’s “Ellis Island Chairs,” remembered her as a loving wife, mother, grandmother and friend, as well as a gifted artist.

“Her masterly rendering of light and shadow was one of the things that made her paintings so beautiful,” Cook wrote to Washington Jewish Week. “Sherry’s paintings of historic rooms where momentous events had occurred left me feeling that the occupants had just left, but their aura was somehow still there. She is greatly missed, but somehow lives on in the sun and shadow of her art.”

Valdy Naimie of the District first came across Sanabria’s work at a gallery opening in 1983 with the painting “Aruba Sanctuary,” which depicted a small adobe-esque chapel with three tiers of benches, and a background of a wide ocean.

“One could taste the air, feel the calm of this quiet scene and imagine all the people who must have at one time or another sat on these benches perhaps to pray, perhaps to simply get away for a moment from difficult lives,” Naimie wrote to WJW. “This is something Sherry did with all the places she chose to paint. She filled them with those who had at one time or another inhabited the beautifully painted spaces, their destiny, their lives to be imagined by us, the onlooker.”

Naimie and Sanabria became close friends over the years and remembers Sanabria telling her many stories of her childhood and youth growing up in the District.

“She allowed me to meet her children, who turned out to be wonderful human beings, her husband Bob Sanabria who was her true soul mate and who was there to comfort her and help her throughout the last years of her life filled with much sorrow and illness,” she wrote. “She was my best friend in this country, in this town, and I will always love her and keep her in my heart.”

Funeral services were held at the National Funeral Home/King David Memorial Chapel on March 6 in Falls Church. Memorial contributions may be made to a charity of your choice. — Ian Zelaya