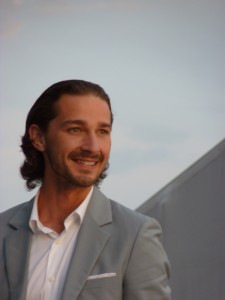 Apparently, Shia LaBeouf either thinks he isn’t or just doesn’t want to be famous anymore. The actor was at a Berlin Film Festival press conference Sunday for his latest, Nymphomaniac, and walked out after 10 minutes after he was asked why he wanted to do a movie with so many sex scenes.

According to The Hollywood Reporter, before walking out LaBeouf answered with the phrase, “When the seagulls follow the trawler, it’s because they think sardines will be thrown into the sea. Thank you very much,” a quote from French soccer superstar Eric Cantona. What that line has to do the with sex scenes, many of which are un-simulated in Lars von Trier’s latest controversial flick, remains to be seen. THR reports that the rest of the panel, which also consisted of costars Uma Thurman and Christian Slater, looked surprised by his exit and later “lightly applauded” his statement.

The 27-year-old actor’s bizarre behavior didn’t end there. Soon after, he posed on the red carpet with a paper bag over his head that read “I Am Not Famous Anymore,” an antic that probably won’t make LaBeouf’s fame die down anytime soon.