It’s a Wednesday morning and Shy Ashkenazi is in the lobby of the Pozez Jewish Community Center of Northern Virginia, encouraging people to talk to him about Israel.

He has a blue die people can roll, labeled with topics like “Elections,” “1000” and “Headlines.” One visitor sits down to chat about Prime Minister Benjamin Netanyahu’s indictment for corruption and says, “Why does this sound familiar?” a nod to the impeachment drama unfolding in Washington.

Ashkenazi, who began working at the center in June, says people are always popping in to say hello or ask him questions about Israel and Judaism. Every Wednesday, he hosts an Israel chat to help people catch up on current events and pop culture.

He’s one of 20 shlichim, or emissaries from Israel, working at Jewish institutions in the Washington area, and one of three shlichim in Northern Virginia.

Ashkenazi is posted to the Pozez JCC. Miri Bernovsky-Tibon, 31, is starting her third year as the shlichah at Agudas Achim Congregation in Alexandria. And Shir Hasson, 26, is in her second year as shlichah at George Mason Hillel in Fairfax.

They are emissaries of the Jewish Agency for Israel, sent to Jewish communities around the world to strengthen Jews’ connections to Israel and to Judaism.

But even though Ashkenazi, Bernovsky-Tibon and Hasson are all here to “push Israel,” as they say, their different placements in Northern Virginia mean they have to adapt their outreach to fit their community’s specific needs.

Differing roles
Noa Bab, of the Jewish Federation of Greater Washington, oversees the efforts of 13 shlichim in the Washington area. She says placing shlichim at Jewish community centers, schools and synagogues helps them address a variety of needs in the area.

The Federation works with the Jewish Agency to choose placements for shlichim in Washington.

At George Mason University, Hasson has to appeal to college students and work around the ever-changing campus life. She says she tries to create an environment for students where they can feel like they’re at home.

“College is usually the time where students try to find themselves and what they believe in and what they’re going to they want to do in the future,” Hasson says. “So it’s kind of a critical time [for me] to try and [leave] a mark.”

To do that, Hasson hosts Shabbat dinners and brings in speakers. She says sometimes the topics or speakers that interest students one year may fall completely flat the next. So she’s always adapting her plans to what the Mason Hillel students want.

At Agudas Achim, Bernovsky-Tibon is working with families that span across generations.

Bab adds that making a lasting impression for families at a synagogue like Agudas Achim can have a big impact. Bernovsky-Tibon teaches adult education classes for the congregation.

“Couples with young children, this is when they really make their choices on how to raise their family,” Bab says.

Bernovksy-Tibon was born in Russia and immigrated to Israel in the 1990s. A social worker by training, she believes that the emotional and intellectual parts of education are very important, especially with adults.

Evolving purpose
When the Jewish Agency, which sends shlichim to two dozen countries, was created in 1929, the state of Israel didn’t exist. So when the emissary program through the agency started, their mission was to assist and encourage people to make aliyah — to bring Jews to the homeland.

But that goal has changed over the years, says Bab.

“As time evolved and things changed, it became more to strengthen the connection between people in Israel and people in the Diaspora,” she says.

If people want to make aliyah, shlichim are happy to advise them, Bab says. But now, the job is more about encouraging “Jewish peoplehood” wherever Jews are now.

“In many ways, its because Israel became more of a strong country and needed help less,” she adds. “It’s really [about] how to interact with modern Israel and showing [Diaspora Jews] the different aspects [of Israeli life].”

She says many people used to arrive at college with an outdated perception of Israel, thinking only of folk dances and swimming in the Dead Sea. But now, they’re “becoming aware to some of the complexity that the country has,” Bab says.

It’s a mantra he tries to live by in his role as shaliach, and a sentiment that Hasson and Bernovsky-Tibon echo. They’re trying to help people connect to Israel or their Judaism — but they also need to create a personal connection by getting to know everyone.

Ashkenazi, who was born and raised in Jerusalem, is a performer at heart; he’s been a medical clown, loves theater and has worked with Jewish camps in the United States for 10 years. So he’s used to creating connections and working with young Jews.

For the shlichim, it isn’t just about spitting out facts about Israel for people to memorize. They point out that people can research information themselves on their smartphones or laptops.

“People will forget if you just spray them with facts,” Bernovsky-Tibon says. “You need to tell a story, you need to make people care, you need to create something that is deeper because that eventually is what lasts.”

One way the position creates a deeper connection is simply by giving people an individual to associate with Israel, someone they can ask questions about life there or think about when they hear news.

“It did happen to me once that the student told me, ‘Oh, you’re Israeli. But you’re so nice!’ And it sounds so funny from this side,” says Hasson, who was also born and raised in Jerusalem. “But then you can understand those guys never met an Israeli. They only read about it in newspapers. They see about it on TV, so they don’t really understand it’s actually people who are living there.”

For George Mason University’s Hillel director, Na’ama Gold, the shlichah’s role is to build relationships — and Hasson, who previously worked in human resources, agrees. Gold herself had been the shlichah at the Pozez JCC, and now she oversees Hasson.

“Having me as a boss can be a good and a bad thing for Israel fellows because I did Israeli fellowship myself,” Gold laughs.

When Hasson arrived at Mason Hillel, Gold told her not to organize any big events in the first two months. Instead, she wanted Hasson to have five or six coffee dates per week with students.

“I think she had 50 or 60 in her first month,” Gold says. “Just to get to know the students in person, and what their needs are.”

Building relationships is the best and most important part of their job, the shlichim agree. Responding to the needs of their communities is an exciting challenge.

And not only are the shlichim teaching others about Israel and Judaism, they’re learning, too.

“It’s the first time I was exposed to the Jewish community outside of Israel at all,” Hasson says. “So I am learning a lot and I’m having many experiences I probably would’ve never had if I never done this shlichut.”

The shlichim talk to people about their own lives and experiences, like living in Israel and working in the United States. So it’s important that they mesh well with the community they’re placed in, and can truly be themselves. 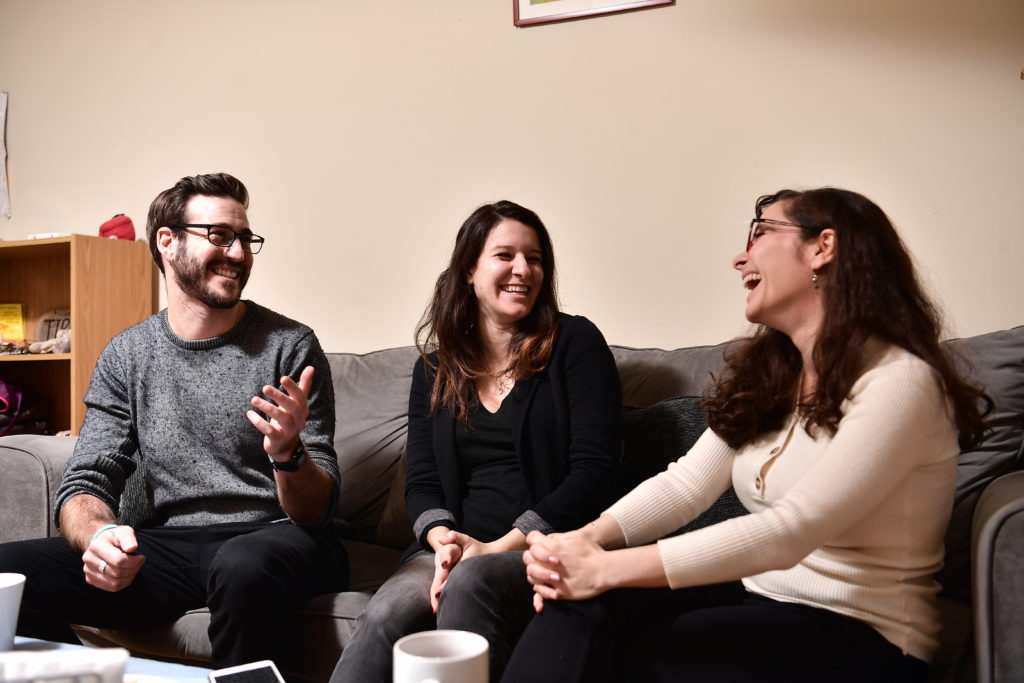 The model Israeli?
In 2014, Bernovsky-Tibon and her husband moved to a kibbutz half a mile from Gaza City. They were so close to any rocket fire that the air-raid sirens only gave them a five-second warning.

Experiences like this are among many that the shlichim share with the Jews they meet. The say they present their true selves, their passions and opinions. Even though their job is to “push Israel,” Hasson says it’s not like they’re presenting a country that’s all “flowers and unicorns.”

“If they ask me about my army service or what I think about what’s going on in Israel, I’m going to say what I think, even if it’s not something they would like to hear, because I’m trying to represent myself and somehow my country in the best way,” she says.

Sometimes, Bernovsky-Tibon says, American Jews feel uncomfortable talking about the issues, like the Israel-Palestinian conflict — but she wants to encourage difficult discussions.

“I feel that people are sometimes scared to touch certain issues that for them it’s like a hot potato,” Bernovsky-Tibon says. “Either you’re critical or you having something that you want to say, but you’re not allowing yourself to say because then it makes you anti-Israel, or it makes you a not good enough Jew or something. I think that for the long-term, it’s a recipe for creating a bad relationship. And I’m there to say, ‘Let’s talk about it.’”

Hasson, Bernovsky-Tibon and Ashkenazi are here to make connections and cultivate the interest of Jews from all demographic groups. Their jobs here as shlichim are part of a developing personal relationship between Israel and American Jewry.

Hasson says, “You’re bringing yourself. And I think that’s the best part about being a shaliach.”