Every time the shofar is blown on the High Holidays, the ritual of bleating sounds and calls of alarm lead up to one thing: the tekiah gedolah, the impossibly long note that tests the shofar blower’s lung capacity and stamina.

When Jonathan Strum blows his shofar at Georgetown University’s High Holiday Services this month, he expects his tekiah gedolah to last more than a minute.

“You take a really deep breath and you let it out really slowly,” he said. “That’s really it. I take a big breath. It’s controlled, and then you go on until you can’t go any more.”

Strum has blown the shofar at Georgetown every year since 1984. High Holiday services attract 800 to 1,000 people, he said. Rosh Hashanah begins at sundown on Sept. 20.

In addition to practice, Strum joked that another trait helped him master the ram’s horn. “I’m a lawyer so naturally I have a lot of hot air,” he said.

Strum was not yet a lawyer when he began blowing the Georgetown shofar. While a graduate student, he called campus Rabbi Harold White to volunteer for services.

Strum ended up singing, reading Torah and blowing shofar, and he has continued to do so for 33 years. Blowing the shofar is like a journey back to his childhood, when the sobering sound was the most anticipated part of the holiday.

Strum doesn’t worry about stage fright or choking up, but he went through a difficult time eight years ago when he broke his nose and split both lips during a quad biking accident in Dubai. Strum said doctors had to suture his lips back together along with his top gum.

“I had to find a new spot on my lips in order to blow,” he said. “The big thing is you need to cover the lip hole and I had to find a different way of holding the shofar. At the end of the day, when you’ve done it enough, you figure it out.”

The key to mastering the shofar call is breath control, said Ross Diamond, who blows shofar at Kesher Israel, an Orthodox congregation in Georgetown.

Diamond said inhaling deeply and using different patterns of exhaling helps release the sound from the horn. When he needs to keep a beat, he taps his foot.

But there is another ingredient to Diamond’s shofar blowing — lip movement.

“The best way to describe it is you put your lips together and you create a vibration with controlled air,” he said. “If you can blow a trumpet you know how your lips are supposed to move.”

Diamond played bugle while in the Boy Scouts. He started blowing shofar at Rosh Hashanah services in 2005 as a student at Penn State University.

A shofar is similar to a bugle in that both require you to breathe through a small hole without having valves to alter the pitch, he said.

“Every shofar is a little different. Some you need to pucker your lips a little more, and some you can relax.”

As it happens, it isn’t necessary to be a brass player to master the shofar, said Jennie Litvack, who will blow the shofar at Rosh Hashanah services at Adas Israel Congregation, a Conservative synagogue in Washington.

“Even though the trumpet and French horn are probably the most helpful [for learning], if you know how to blow raspberries on a baby’s tummy you’re vibrating your lips,” she said.

As Litvack practices blowing her shofar at her home, she produces a low pitch resembling something closer to a trumpet in a symphony than a shofar in a synagogue. The difference in sound, she said, comes from the Yemenite shofar she uses that is made from a kudu, or antelope.

There is one more factor in getting the shofar blast to sound right, said Litvack, who is also on the board of Adas Israel’s Jewish Mindfulness Center.

“When I lift the shofar to my lips I get immediately to a point it takes me a long time to get to with meditation,” she said. “I wait a couple seconds to get centered, put my lips on the mouthpiece and I take the breath. And then when I blow, I feel total connection and total oneness with God and everyone there. With the past, with the present, with the future. And so there’s no words going on in my head. No effort. I’m just doing it.”

How not to ask for time off on the Jewish holidays 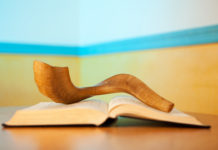 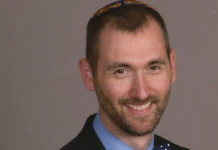