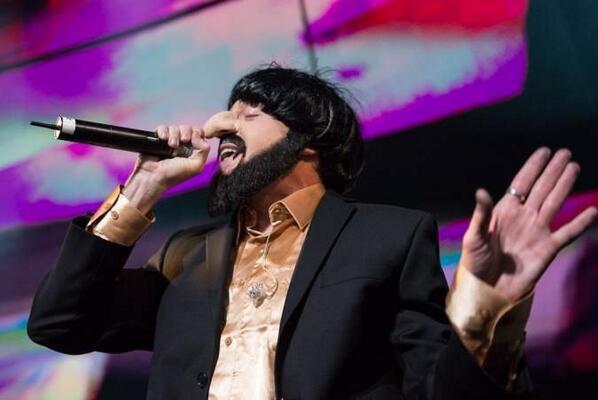 When Macklemore performed his hit song “Thrift Shop” for fans in Seattle last week, his outfit garnered more attention than the 2013 smash hit. Donning a giant prosthetic nose and a large, dark wig with a long beard, many felt that his getup mocked Jewish stereotypes. The Daily Dot said his outfit turned him into “some kind of Jewish caricature, prosthetic schnoz included.”

During the performance at Seattle’s EMP Museum, the “Same Love” rapper didn’t speak about the significance of his costume, but after news outlets picked up the story and appropriated it with anti-Semitism, Macklemore was quick to respond on Twitter.

A fake witches nose, wig, and beard = random costume. Not my idea of a stereotype of anybody.

We’re not sure why Macklemore thought wearing this outfit would be a good idea, but Seth Rogen may have tweeted it best.

The rapper published an apology on his website Monday. – Ian Zelaya

Trainer Art Sherman and crew were informed Monday by the New York Gaming Commission that California Chrome, which won the Kentucky Derby and Preakness this year, will be allowed to wear a nasal strip that Sherman has been providing to help its breathing, during the Belmont Stakes next month.

In 2012, the commission prohibited I’ll Have Another from wearing the same nasal strip when competing for its own Triple Crown. Rumors that Sherman and his group would pull their horse from the race if the commission barred the nasal strip were rampant over the weekend as the story developed.

If California Chrome wins the Belmont stakes, it will be the first horse to win the Triple Crown since Affirmed won it in 1978. – Max Moline

From Spider-Man to transgender woman, Andrew Garfield certainly has a wide acting range. The Amazing Spider-Man 2 actor is the star of Arcade Fire’s new music video for “We Exist,” where he portrays the latter, struggling with issues of gender identity. The song, which is about a son telling his father he’s gay, shows Garfield in a wig and cutoff jeans, living in a small, rural town.

He gets in a fight with a group of locals at a bar, and then dances his way to a real, Arcade Fire performance at Coachella music festival. Two interesting bits regarding the video: The final segment was actually filmed during the second week of the California music festival, and Garfield has got some killer moves. You can see it in its entirety on YouTube. – I.Z.

Barbara Walters signs off from ‘The View’ 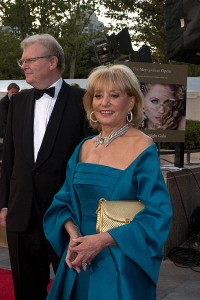 Barbara Walters may have concluded her time as a View co-host, but she went out on a humorous note.

“The good news is, that now I will have time to get Botox,” said the longtime journalist and TV personality during her final hour on The View last Friday. “But now that I’m no longer going to be on the air, I don’t need Botox.” During her parting words, Walters, 84, also joked that she was now available for supermarket openings and lunches for a $10 fee.

The episode also featured appearances from Hillary Clinton, Oprah Winfrey and Michael Douglas. During her closing remarks, Walters said, “Finally, how proud when I see all the young women making and reporting the news. If I did anything to make that happen, that’s my legacy.”

Check out some highlights from Walters’ 17-year run on The View.