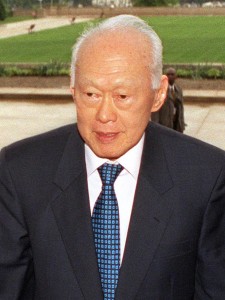 Singapore’s first prime minister Lee Kuan Yew died on Monday at the age of 91. The Cambridge-educated lawyer is widely credited with building Singapore into one of the world’s wealthiest nations.

According to Haaretz, in his 2000 book From Third World to First: The Singapore Story, Lee recalled how Israel helped set up the country’s army when Singapore separated from Malaysia in 1965.

The job of building Singapore’s army was given to Maj. Gen. Rehavam Ze’evi, and the military delegation was headed by then-Col. Yaakov Elazari. Then Chief of Staff Yitzhak Rabin told the Israeli team that the operation would be successful when Singapore could run its own military.

Israel and Singapore maintain close military ties to this day.
— Additional reporting by Haaretz and Reuters