“All [the photos] were really important to me but I wasn’t sure what to do them,” says Foer, the executive director of Sixth & I Historic Synagogue in the District. “I looked at them and I started playing with them and thought, well maybe I can do something different with these memories. My photo albums are important to me, but fundamentally, memories are important.”

A year later, Foer, who comes from a family of Holocaust survivors, has uniquely reworked and framed many images she photographed during her travels in Ukraine, Israel, Poland, Brazil and other countries.

“You take what was there and start putting it together in a different way and it becomes something different,” is the way she puts it. Together, the exhibit is known as Reassembled Memory, and is currently on display at Sixth & I. Foer, the mother of three successful literary sons and the passionate picture-taker and collector on her side of the family, notes that every little memory and picture is precious. This project gave her a chance to express her ideas and deal with her memories in a different way.

“We’re really proud of Esther, to have our executive director have an exhibit down here,” says Hannah Orenstein, communications manager at Sixth & I. “Esther never really gets to have something of her own, so we’re very proud. [Visitors] are always surprised to find out it’s our executive director.”

Some of Foer’s favorites and the most meaningful to her on display happen to be photos she took in Ukraine, which include a mass grave in a Ukrainian forest reassembled in a telescope pattern, and a layered picture of the Styr River, near the house where her mother had grown up.

“When I found her house and walked down to the river, it just took my breath away,” she says. “For the first time when I saw this, I had a different vision of my mother. This is what she was as a young woman; this is where she lived a different life. I just found it mesmerizing.” 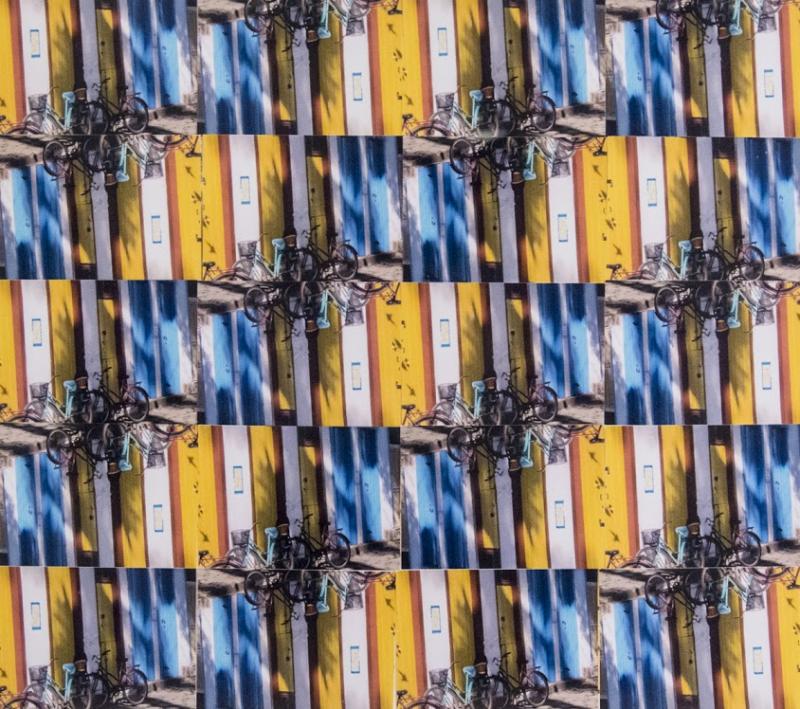 Not all of the photos delve into darker and more emotional memories from Foer’s past. Many capture upbeat and happy memories from her travels, including an uplifting picture of a sunset she took on Maui in Hawaii. Foer says she’s never seen a more beautiful sunset, an image that she turned upside down for the display. For most of her reassembled photos though, Foer likes to focus on the little details rather than the big scene.

“It’s usually the unexpected thing that becomes the big picture,” she says. “I’ve always taken pictures of that little tiny detail that somehow had meaning to me. That’s what made these pictures possible.”

One of the most recently taken photos on display resembles fall leaves, but it actually happens to be a moment from when she was invited to the White House Chanukah party last month with one of her colleagues. “I brought my camera because I bring my camera everywhere,” she says. “While we’re all cramped together waiting for the president, I looked down and saw all of our feet in the shadows. I said, ‘That’s my picture!’ I love that it doesn’t look like what it is. It’s reinterpreting what it is.”

Reassembled Memory comes just in time for Sixth & I’s upcoming 10th anniversary in April and Foer hopes to work on more art projects in the future. She’s even set up her own workspace in her house.

“This has now become a very meaningful way for me to spend time. I’m always doing things with my hands and creating. I’d like to think of Sixth & I as a creation,” she says. “This is what we’re about. Stretching ourselves and stretching our creativity.”

Reassembled Memory is currently on view Monday-Friday from 1 p.m.-2 p.m.