Washington city government in the 1980s under the leadership of Mayor Marion Barry was “one big insane asylum,” says author and former District of Columbia employee Lee Hurwitz.

That is also the takeaway from Hurwitz’s novel, “Capital City,” which he co-wrote with attorney Tim Treanor. The book focuses on fictional Washington Mayor Wendell Watson, a character loosely based on Barry, and the mess he gets himself into when a government subcontractor sees one of the mayor’s security guards kill a woman with whom the mayor is having an affair.

This sets off a chase throughout the southeastern United States involving the witness, the security guard, a hit man hired by the mayor, and eventually the FBI. At the same time, Watson attempts to distract the media and the public by pushing a D.C. statehood initiative with a Utah congressman.

“Capital City” will keep readers on edge with its mix of sex, lies, posturing and money-under-the-table deals happening in the District Building, now called the Wilson Building. Each chapter contains three or four scenes, which can help the reader keep up with the book’s many subplots. Some scenes are fast paced and feature rich dialogue, moving the plot forward with some new twist. Others serve to give insight into the behind-the-scenes activities of city hall. 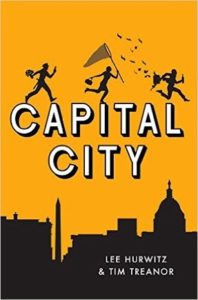 Barry was credited for cutting spending during his early years as mayor, increasing economic development and increasing summer employment for city youth.

But Barry also became infamous for his drug and alcohol addiction coupled with extramarital affairs and failure to pay taxes.

His fall came in 1990, when he was arrested in a sting operation by the FBI and D.C. police; a videotape shows him smoking crack cocaine in a hotel room with a woman with whom he’d had a relationship — an episode which inspired the novel. Barry served six months in federal prison, but made a political comeback and was elected to another  term as mayor in 1994.

Hurwitz, a Rockville resident who worked as a transportation analyst in Washington’s Department of Public Works from 1978 to 1989, barely knew Barry. In an interview, Hurwitz said there were people who worked with Barry who criticized the mayor for what they saw as womanizing, drug use and disdain for white people.

“When [Barry] would make public pronouncements, 99 percent of them were fine,” Hurwitz said. “But when he was in meetings with his people that he worked with, he used to make some very, very anti-white remarks. My boss once told me he was in a meeting and [Barry] said, ‘There used to be a lot of discrimination in this country, but we’re in charge now and we’re going to make up for that.’”

Almost every character in “Capital City” is inspired by someone Hurwitz knew.  The authors’ fictional subcontractor, Evelyn Boone, was inspired by a city employee that in the interview Hurwitz called “Jane Doe” and described as “a gorgeous African American woman who looked like Halle Berry.”

Hurwitz, a contract specialist at the Library of Congress, started thinking about writing a novel in the 1990s. He met Treanor at a writer’s conference in 2002 and the pair went to work on “Capital City.” They finished writing in 2004 and then spent the next 10 years searching for a publisher.

The book was published recently by HighLine Editions.

Some parts of the book may confuse those unfamiliar with city government. In the opening scene, the public works director has lunch with a contractor who is to install a computer system to collect parking-ticket revenue. Hurwitz said that Washington, a city of about 700,000 residents at that time, made $100 million from parking tickets — a larger per capita take than in New York City.

Other than the FBI and the Metropolitan Police Department, there are no heroes in “Capital City,” and it is easy to come away with a cynical view of the D.C. government.

Many a character in “Capital City” seems to be leading a double life. Hurwitz said that was the reality inside the District Building in the 1980s.