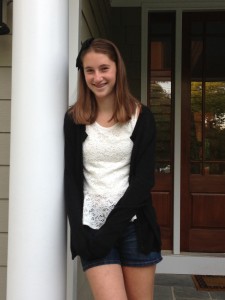 Sophia Faith (Sophie) Becker, daughter of Mila and Scott Becker, will become a bat mitzvah Saturday at Congregation Beth El of Montgomery County in Bethesda. Family members joining in the simcha are her sister, Alexandra, grandfather, Jerold Roschwalb of Bethesda, and many aunts, uncles and cousins. Friends receiving honors during the Torah service will include her friends from Congregation Beth El religious school and Esther Silverman of Rockville, who is over 90 and became a bat mitzvah last year.

Sophie is an honor roll student at North Bethesda Middle School. She enjoys learning French, traveling and ballet. She is an accomplished dancer studying at the Royal Academy of Dance and has performed on stages in Montgomery County since she was 5. Her bat mitzvah project was raising money for the Susan G. Komen Global Race for the Cure. Sophie’s team raised $10,156.51 and she was one of the top fundraisers for this year’s event. Following her bat mitzvah, Sophie will attend Camp Habonim Dror Moshava and then visit Israel with her family.