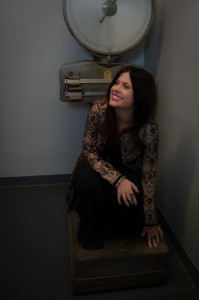 At 39, Neshama Carlebach says she is seeing herself clearly for the first time. The daughter of the legendary “Singing Rabbi,” Shlomo Carlebach, and a successful vocal artist in her own right, she will perform at Beth Shalom Congregation in Columbia on Saturday. As Beth Shalom’s scholar-in-residence, and in observance of Shabbat Across America and Canada — a continent-wide event to unite Jews of all denominations — Carlebach also will participate in and perform at a congregational Shabbat dinner on Friday night, and during Friday and Saturday morning Shabbat services that weekend.

“We are so excited to have Neshama come to Beth Shalom,” Konel said. “It will be a great way to reconnect with one another.”

The performances come in advance of Neshama Carlebach’s new album, Soul Daughter, which features music from Soul Doctor, the 2013 Broadway musical about her father she co-created. Carlebach said the album, to be released later this spring, reflects her inward journey.

“I am just coming back to work after a year off, and I’m feeling very serious about my Jewish journey,” she said. “There have been a lot of changes in my life, and I’ve become a bit disenfranchised from the Modern Orthodoxy with which I grew up.”

In addition to her religious transformation, Carlebach said she has been dealing with the end of her marriage and finally coming to grips with the death of her father, who passed away 20 years ago.

“After my father died, my first solo concert came 30 days later. I sang through death, pregnancies and two babies,” she said. “I started singing at 20 and never before had the heart to stop and look at my life. I mourned my father for the first time, and I dealt with my deepest self. It was a gift.

“When I decided to turn the light on, I had to be honest with myself,” she continued. “I couldn’t ignore the fact that much of my life was wrong. Like many other people are, I was a stranger to myself. It’s been the most painful, but the most worthwhile time in my life.”

In December, Carlebach made headlines in the Jewish media when she announced her aliyah to Reform Judaism. The announcement was lauded by some and criticized by others, but Carlebach is quick to point out that both she and her late father have been known to step outside the boundaries of Orthodox Judaism before.

“When I was growing up, my father was always on the edge, and he was often attacked for his choices,” she explained. “He searched for a new path and looked for ways to unite. He got into a lot of trouble. It was only after he died that many of his detractors accepted him.”

Recently, Carlebach became the first woman to sing for the March of the Living, a Holocaust education program that takes participants to the sites of concentration camps in Poland and then on to Israel. She also performed in Japan as part of an interfaith program called Prayer for Peace.

For the past eight years, Carlebach has collaborated with Rev. Roger Hambrick and the Green Pastures Baptist Choir. The album, Higher & Higher, that grew out of the musical collaboration was an official entrant in the 2011 Grammy Awards. Carlebach said she feels most Jewish and closest to God when singing with the choir.

Carlebach’s new album was produced by Josh Nelson, another frequent collaborator. She described the music on the recording as vulnerable, organic and more contemporary than her previous records.

“My band is incredible; they’re some of the best musicians in New York,” she said. When she performs at Beth Shalom, Carlebach will be performing songs from the new album.

“I feel very blessed to be able to offer my music, and I’m looking forward to coming” to the Baltimore area, she said. “Expect to be moved.”