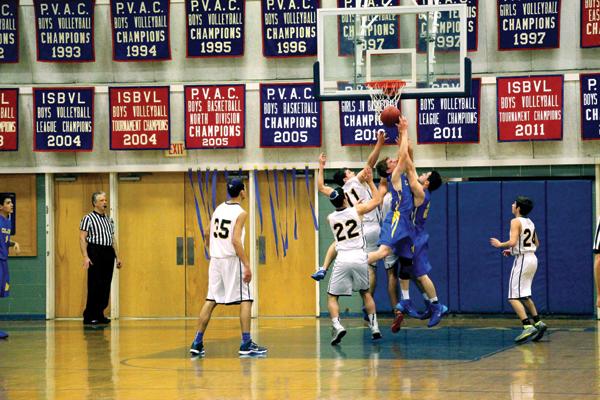 by Robbie Belson and Evan Kravitz

A normally nondescript gymnasium on Arctic Avenue in Rockville was transformed on Feb. 1 into a championship-like basketball showdown between the two Jewish schools in the Potomac Valley Athletic Conference (PVAC).

That evening, the girls and boys varsity basketball teams for the Charles E. Smith Jewish Day School – the Lions – came to Melvin J. Berman Hebrew Academy to face off in one of the conference’s most heated rivalries.

Fans chanted songs and filled the bleachers. Berman Academy senior and boys varsity basketball player Josh Stern hoped that the energy in the gym would help his team win.

“[This is] just a big rivalry game that we hope we could win,” Stern said. “Hopefully the home crowd will give us a boost to win.”

The home crowd was not enough for the Cougars to overcome the Lions during the boys game. The Cougars lost 63-42, and fell to 4-10 in conference play.

Junior David Leviedden and seniors Stern and Jacob Mellman, who scored 14, 13, and 12 points, respectively, combined to score all but three of the Cougars’ 42 points.

The Cougars attributed their loss to sloppy play.

“We didn’t make enough layups and the foul shots that we should’ve made,” Stern said. “We didn’t box out as much as we should’ve in giving them a lot of second-chance points, which really hurt us.”

“It was a good win, we needed it against our rivals,” Shorr said. “[We had] a lot of missed layups and shots that weren’t falling, and our defense was pretty bad … but other than that it was a good win.”

The Lions improved to 15-0 in conference play.

The night also featured the game between the girls varsity basketball teams. After falling behind 16 points in the first quarter, the Cougars went on a 14-9 run, only to fall short 51-39.

“We definitely came out really strong, [but] we had some bad passing [and] a lot of mistakes … but we came out strong [and] we finished strong,” CES-JDS girls varsity basketball player and junior Yaira Kalendar said.

While the players battled it out on the court, the schools’ newspapers came together to livestream the games on their websites, with commentary from student staff members. The coverage blitz by CES-JDS’s The Lion’s Tale and Berman Academy’s Hamodiya featured live tweets and blogging, and real-time photo updates. The online coverage attracted viewers from across the country.

“The broadcast allowed for me to continue to follow the team,” CES-JDS alumnus David Solkowitz, who followed the games from Bloomington, Ind., wrote in an email. “The teamwork shown by both sides in order to bring the game to everyone was amazing.”

Robbie Belson and Evan Kravitz are juniors at Charles E. Smith Jewish Day School and on the staff of The Lion’s Tale student newspaper.

The 2014 BBYO DC Council AZAA Basketball regular season got underway on Jan. 26, when chapters came to the Jewish Community Center of Greater Washington in Rockville for week one of the year.

In the opening game, Abe Pollin AZA beat Simon Atlas AZA’s B team 57-48. Pollin started the year off strong, holding a convincing lead for the majority of the game. A main reason for this Raptor domination was underclassmen, specifically the talent of freshman Matthew Popeck.

Simon Atlas’ bad week only got worse when their A team lost to Einstein’s B team by 7. The stunning victory by a B team over an A team bodes well for Einstein’s basketball future. Einstein A, the defending 2013 AZAA Champion, got the opening week off.

For Oseh Shalom BBYO it was a week of mixed results. Their B team was crushed by Melech’s A team, 51-17. Melech, led by senior big man Ezra Sokobin, looks poised to make a deep run in the playoffs, as long as their younger players become more experienced. Oseh’s A team thumped Brandeis A 52-28.

Brandeis put up a great effort early on, mainly because of the efforts of seniors Jacob Adler and Brent Greenberg. But the depth of Oseh was too much to overcome. Feathers were ruffled late in the game when Oseh designed a potential buzzer-beating play in the second half, despite already winning by double digits. It will be interesting to see what happens regarding this in the coming months.

Along with Einstein, Max Cowan AZA and Lantos AZA had the week off. Cowan’s success this season largely depends on senior Alex Dagen. Like Dagen for Cowan, Lantos senior guard P.J. Glasser, the hero during their 2013 AZAA Football Championship run and star guard for Richard Montgomery High School’s Varsity Basketball team, goes into the season as one the most explosive players in the council.

Max Byer is a junior and a member of Lantos AZA.