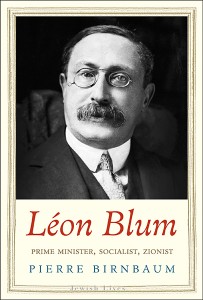 Hitler reoccupied the Rhineland in 1936, Mussolini consolidated his hold on Italy, and Franco began his conquest of Spain.  Nazism and fascism were ascendant. But in France, the situation was very different. A socialist Jewish intellectual became the head of the French government.  For a brief moment, while much of Europe spiraled into a Nazi and fascist pit, France, with a Jew at its helm, went in a different direction.

French-Jewish historian Pierre Birnbaum published a 2014 study of Léon Blum, France’s first  —but not last — Jewish prime minister. The small volume has just been translated into English Léon Blum, Prime Minister, Socialist, Zionist.  It provides Americans with an opportunity to become acquainted with Blum, a figure little known in America, but of tremendous importance to both France and the Jewish people.

Birnbaum’s book is primarily concerned with explaining Blum’s political philosophy and his intellectual contributions to French and Jewish thought.  The volume does not provide a specific chronology of the life of Blum, nor is it easy to follow for those not very familiar with 20th century French history.  However, Birnbaum’s book provides critical insights into the intellectual makeup of a Jew who was a pivotal figure in French history.

Blum was descended from an assimilated Alsatian-Jewish family that had lived in France for centuries.  A brilliant student, he attended some of France’s best public schools and became a member of the French bureaucratic elite.  He was, in Birnbaum’s terminology, “a state Jew.”

Simultaneously, he was accepted into some of France’s exclusive intellectual circles of his time, many of which had Jewish members, such as Marcel Proust, Tristan Bernard and Marcel Schwob.  Despite the impact of the Dreyfus Affair, which spread the venom of anti-Semitism throughout French society, surprisingly, Blum accomplished this without denying or minimizing his Jewishness. In fact, Blum began his political involvement as a result of his perception that the conviction of Alfred Dreyfus had been illegal and the product of anti-Semitism.

As a young lawyer, Blum was appointed a member of the Conseil d’Etat, France’s highest administrative court.  He spent much of his spare time writing for literary publications.  His most important works were a study of marriage, an exercise that he personally experienced three times – even as he conducted a number of romantic affairs, and the Dreyfus affair.  Then, he entered politics.  Even as he rose through the ranks of the French Socialist Party, becoming a disciple of Jean Jaures, the titan of French socialism, Blum never shied away from his Jewish origins.

By the mid-1930s, Blum had become the head of a left-wing coalition that affirmed its faith in the principles of the French Republic, espousing a form of democratic socialism.  Despite rising anti-Semitism and ferocious personal attacks against Blum from right-wing movements, on May 3, 1936, the Socialist Party won the legislative elections. Within a few days, Blum became prime minister.  The Blum ministry, known as the Popular Front, lasted just a little more than one year – a relatively long period of time for governments of the Third Republic.  Blum would return to power again for a few weeks before the outbreak of World War II.

During his tenure as prime minister, he and his government enacted progressive social legislation that profoundly changed the abysmal working conditions of French workers. His government instituted a shorter workweek, paid vacations, and social benefits. Yet, despite these accomplishments, he failed to achieve many of the Popular Front’s announced goals and his government left much disappointment in its wake.

Subsequent years would be hellish for the Jewish Blum. Unlike many French leaders of the Third Republic, after France had been defeated by Germany, he refused to leave metropolitan France and was promptly arrested and imprisoned by the Vichy government.

He was forced to stand trial as a traitor.  However, his skillful oratory forced the government to suspend the trial out of fear that he would be exonerated. He was then sent as a political prisoner to Germany, where he ended up spending two years within the confines of the camp at Buchenwald.  He was ultimately liberated by American troops. His brother, Renë, was less fortunate, dying a terrible death at Auschwitz.

Despite the deprivations that he suffered in Germany, he was able to return to France and resume the leadership of the Socialist Party.  He again become prime minister for a brief period.

Birnbaum completes his analysis of Blum’s political philosophy by focusing on his support for the creation of the State of Israel and his strong advocacy for Zionism. Very few French Jews and even fewer French politicians supported Zionism before 1948. However, Blum was unabashed in his enthusiastic advocacy for a Jewish state.  He spoke out for the creation of Israel and maintained very close relationships with Zionist leaders.  The importance of his support is still memorialized by a kibbutz very near the border with Lebanon, Kfar Blum, named in his honor. A large portrait of Blum adorns the communal dining room at the kibbutz.

Blum stands out as a humanist in an age that sought to destroy large swaths of humanity.  He advocated for the welfare of individual workers, when the predominant force of the time was unbridled nationalism that denigrated the individual.  He was a proud Jew when Jews were being vilified and then exterminated. He epitomized the best values that France has to offer at a time when France itself joined in the worse excesses against those values.

Pierre Birnbaum has rendered an important service in reviving his memory and introducing him to Americans.

Gerard Leval is a partner in the Washington law firm of Arent Fox LLP.  He is active in both the Jewish and French communities of the Washington metropolitan area. He has lectured and written on topics related to French-Jewish history.