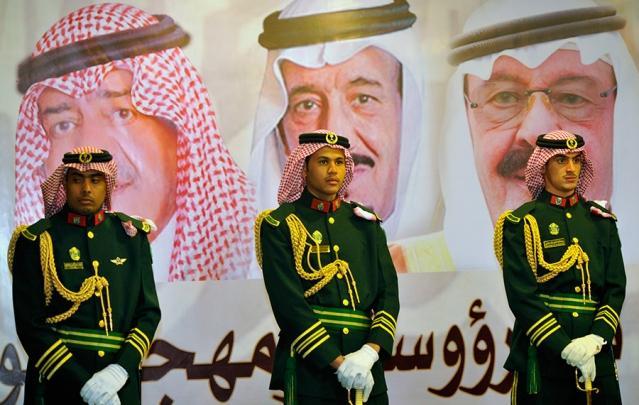 The official announcement that King Abdullah had been taken into a Riyadh hospital “to undergo some medical checkups” suggests serious concern about the health of the ninety-one-year-old monarch because he is assumed to have excellent medical facilities in his own palaces. Clearly overweight, he has previously been reported to have back problems, assumed to be responsible for his difficulty standing and thus his need for a walker. Unreported problems are thought to include the consequences of years of heavy smoking.

Theoretically, his successor would be his half-brother Crown Prince Salman, who is seventy-eight. Despite the appearance of robustness given by a heavy public schedule of meetings, Salman’s brain is evidently ravaged by dementia. Visitors report that after a few minutes of conversation, he becomes incoherent. The fact that Salman appears in public at all is attributed to his determination to become king — or, more likely, the ambition of his closest relatives that he should do so.

Such are the rivalries in the House of Saud that King Abdullah has been unable to displace Salman, although last March he appointed another half-brother, Muqrin — the youngest surviving son of Saudi Arabia’s founder, King Abdulaziz, also known as Ibn Saud — to the new position of deputy crown prince. Controversially, this meant passing over the claims of other half-brothers and maneuvering in the Allegiance Council to secure an advance baya, or oath of allegiance, to try to cement Muqrin’s new status. Significantly, Muqrin’s confirmation was officially reported as not unanimous.

In recent months, King Abdullah’s public appearances have become increasingly rare, but he has remained the top decisionmaker, meeting Emir Tamim bin Hamad al-Thani of Qatar in mid-October to resolve an intra-Gulf squabble and King Abdullah of Jordan in mid-December, probably to discuss Syria.

A power vacuum in Riyadh following the death or extended hospitalization of the Saudi monarch will prompt concern in international capitals because of Saudi Arabia’s importance as the world’s largest oil exporter. Despite its dominant market position, the kingdom has seemed powerless to stop the recent price fall, instead trying to preserve market share and perhaps undermine U.S. shale exploration. Other areas of concern would include the impact on the Saudi leadership’s position in Arab and Muslim-majority states, particularly in coping with the threat of the Islamic State of Iraq and al-Sham (ISIS), against which Riyadh is a key member of the U.S.-led coalition. Also, simmering trouble among Iran-influenced Saudi Shiite activists is a perpetual worry.

Washington has traditionally tried to avoid influencing succession in Saudi Arabia because of lack of leverage and possible adverse consequences. But with the prospect of a messy transition, the United States will need to emphasize the importance of competent leadership emerging quickly, not relying on the mere hope that the House of Saud can sort this out itself. Although probably best done discreetly, there is also a danger that quiet diplomacy will be mistaken more widely for indifference.

Simon Henderson is the Baker Fellow and director of the Gulf and Energy Policy Program at The Washington Institute.

All we have to do is try

It’s okay to be angry