From the above biblical passage, we learn that for seven days the Jewish people are required to build and live in a “booth” or a sukkah. For many, the act of building a sturdy and livable sukkah that won’t blow over in the increasingly unpredictable fall weather is easier said than done.

Landau — who explained that his first sukkah as a newly wed many years ago, was only 6 feet by 8 feet and came from a kit — has been building a 16-by-20.7-feet sukkah in his backyard for the past 15 years.

Using lumber, deck screws, studs, canvas, heavy-duty staples, bamboo and evergreen branches, Landau began construction on his family’s sukkah that can accommodate up to 25 people comfortably (Landau and his three children usually try to sleep in it, as well) on Aug. 26 and has so far put in about 30 hours of labor, expecting to finish the job after Yom Kippur.

Landau, who has added features like counter space and a sink with hot and cold water over the years, laid out the basic steps for building a sukkah, adding that anyone can build a temporary, yet secure, dwelling to fulfill the mitzvot of Sukkot.

Landau suggests measuring your outdoor space in order to figure out how much lumber you’re going to need. It’s also important to figure out how you want to fasten and secure the corners of the structure which, Landau explained, can be done using trial and error. For example, he used to build his sukkah using nails and over the years has found that deck screws are easier and hold the sukkah better.

Step 2: Form a team and make a frame

Anchoring your sukkah to a sturdy structure like a deck or a house is important, Landau said.

“Despite the fact that it’s a temporary dwelling it’s not supposed to fall down.” 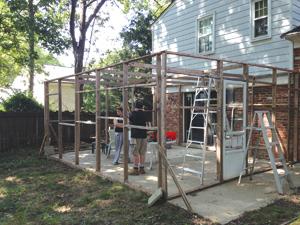 He suggests recruiting at least two adults to help put up the structure and the frame before laying down the sill plate, or a 2 x 4 that lays flat on the ground and serves as the bottom of every wall. The next step is to use a framing angle to place studs or uprights on either end of the sill plates, placing a header across the top of every sill plate and stud structure. This, Landau explained, will leave you with a big rectangular frame for your sukkah requiring some final studs that will vary, depending on the builder’s decision to create a door or other opening in the frame. 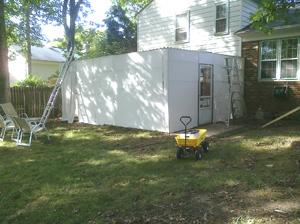 Step 3: Finish the studs and get your staple gun out

Once the frame and the canvas are up, the next step is creating your sukkah’s temporary roof or s’chach. While many s’chach options are available, Landau uses a mix of bamboo that he has harvested over the years from a friend and some evergreen branches that are driven in from 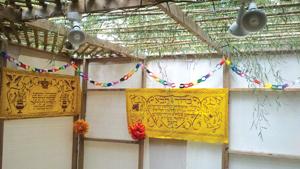 Michigan and distributed by Southeast Hebrew Congregation. Lay the s’chach over the horizontal beams, making sure to leave room for sukkah dwellers to be able to see the sky (as is required in the Talmud).

Once the structure and the roof of your sukkah is in place, it’s time to decorate your temporary dwelling. While Landau’s family uses string lights and plastic flamingoes, each sukkah builder may decorate to their own preference.