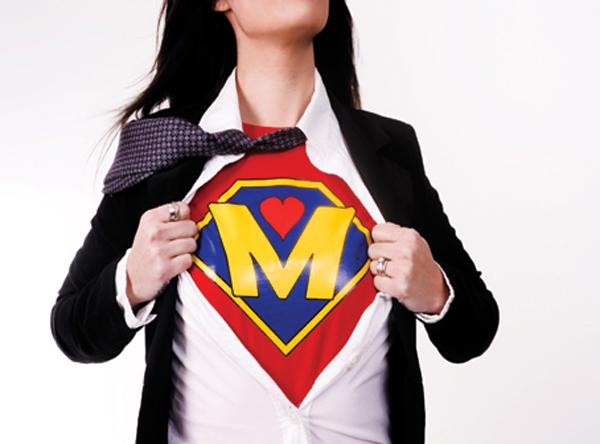 If you happen to spot a frenzied woman kneeling on the floor in the candy section of the kosher supermarket and sifting through bags of licorice lace and bubblegum to find Sunkist Fruit Gems, smile and be kind. She is probably a bar or bat mitzvah child’s mother in the throes of completing her epically long to-do list.

Shopping for soft jellies people will throw at her child after he completes his Torah reading will be followed by an express hair appointment just before a dash to the airport to collect a throng of deplaning relatives and all their baggage.

Speaking of Sunkists, she had better remember to find small baskets her nieces will use to carry and distribute the candies to synagogue congregants. “Pick up two baskets,” scribbles the woman in tiny letters on the bottom of a piece of paper, as she rises from the cold floor with red splotches on her knees and scurries to the checkout line.

Everyone knows the week before a bar or bat mitzvah is a nerve-racking time for the young teen or tween. But the last week before the bar mitzvah is an equally harrowing crunch time for the mother of the mitzvah and often the father too, especially if it’s their first time making one. While thousands of big and small decisions have already been made, the time for second guessing extends right up to the look on your mother’s face when she sees what you’re planning to wear. Plus, all too many details can’t be addressed until you approach the finish line.

Most of us are not used to planning “events,” and the bewildering number of decisions can ruin the experience unless you figure out there is no one way to do it right. Since I have three boys who go to a Jewish day school, I can honestly say I have probably attended close to 100 b’nai mitzvah. Every service was unique in some ways and alike in others, but the parties were all over the map.

While one celebration involved exuberant kids spending the evening bouncing on trampolines, another had them dressed up in formal elegance at the Ritz. While one family celebrated by renting out a rock-climbing gym, another took her guests dancing and dining on a cruise ship. Some families invited a few friends to a baseball game, and others took 100 friends to the beach for the weekend.

Whatever direction a family chooses, one thing is certain: Something will go wrong at the party. It always does. The secret is not to panic.

At my first son’s bar mitzvah, it was the food. We ordered special glatt kosher meals for our out-of-town Orthodox relatives who gamely drove six hours to spend a few hours at our simcha before heading home. The waiters plated the food, making it unkosher. The relatives wouldn’t touch a morsel, but they still talk to us.

At my second son’s bar mitzvah, we forgot to hand out the giveaways until half the guests had taken the elevator down 12 floors. It took a few weeks, but we eventually managed to distribute them to all my son’s guests, more or less, I hope.

I was ready for the unexpected by the time my third son’s bar mitzvah came along this past February, when the biggest blizzard in years was forecast up and down the East Coast. It was scheduled to arrive two days before my son’s big day. Many people called to see how I was handling the imminent disaster. I told them I was unperturbed, but no one respected the bliss of an ostrich with her head in the snow.

“Aren’t you worried?” a friend from the gym asked, as we pedaled nowhere together.
“Nope,” I said. “I never worry about things over which I have no control.” I do worry about not having anything interesting to say at work parties or if my panty lines are showing. But they didn’t need to know that.

He nodded, but his eyebrows veered skyward, where heavy white clouds were gathering. He didn’t understand or simply didn’t believe me. My son’s bar mitzvah was five days away. My friends knew I had to manage the details of a Kiddush luncheon for an entire congregation, a four-hour party celebration involving the feeding and entertainment of adults and children in the same room, and a Friday night dinner for 25 out-of-town relatives and guests.

My duties included coordinating with a caterer, a club manager, the rabbi and my overtaxed computer. Early-bird family guests had already begun to arrive. My husband was out of town and due back in the middle of the blizzard, along with at least a dozen more relatives and friends. I had a to-do list longer than Crystal Gayle’s hair. Why was I so calm?

Reason No. 1: I was not afraid of snow. I grew up in Toronto for goodness’ sake. I had three shovels and three sons.

Reason No. 2: My husband was out of town. I was in charge. I liked this.

Reason No. 3: I had the best backup. My sister lives 12 minutes away by car. She is the most dependable, loving and supportive friend and sister ever. Period.

Reason No. 4: I was not working outside the home. This gave me plenty of time to get the big projects done well ahead of time.

Reason No. 5: My bar mitzvah boy was self-motivated and responsible to a fault. He was ready. He had practiced. All the pieces of his performance were in place.

Reason No. 6: Forecasters are wrong half the time. But even if they turned out to be right this time, the bar mitzvah was going to be great, with or without snow. Ostriches who have already organized two b’nai mitzvah know these things. And now so do you.

Reason No. 7: If all else failed, I had a pantry full of good red wine in the basement.

Denyse Tannenbaum is a freelance writer and mother living in Washington.