The homeless shelter is buzzing with activity. About a dozen volunteers are setting up huge serving trays filled with casserole, Several other members of Kehilat Shalom stop by to say hello and drop off more food.

It’s Christmas morning at the Montgomery County Coalition Men’s Shelter in Rockville, and members of Kehilat Shalom, a Conservative congregation in Gaithersburg, is here to serve its annual holiday brunch.

This is a temporary shelter and the volunteers are crowded into a corner, close to rows of bunk beds. The men who call the shelter home sit in folding chairs watching a movie, waiting for brunch.

The shelter has no stove or oven, just a microwave. So the members cook the food and bring it over.

Debbie Finch, the lead organizer of the meal, makes up the menu and sends out an email to see who wants to cook.

She said it’s important that the men are served a festive Christmas meal.

“If they can’t get at least a decent breakfast at Christmas, when are we going to do it?” she said. “This is an important holiday for them.”

Bobbie Goldman said she woke up early to finish her casserole.

Eight years ago, she came up with the idea to serve a meal at the shelter. She had heard about a restaurant that was going to give out food to the homeless on Christmas, but nobody showed up to eat. Since people weren’t going to the food, she decided to take the food to the people.

“The bunk beds are literally one arm’s length from each other,” one volunteer said. “This is not what you would think of as heaven. This is a lot of people crammed into a small space and it’s not easy.”

Some of the dishes go more quickly than others. The French toast casserole is especially popular, as are the pastries. 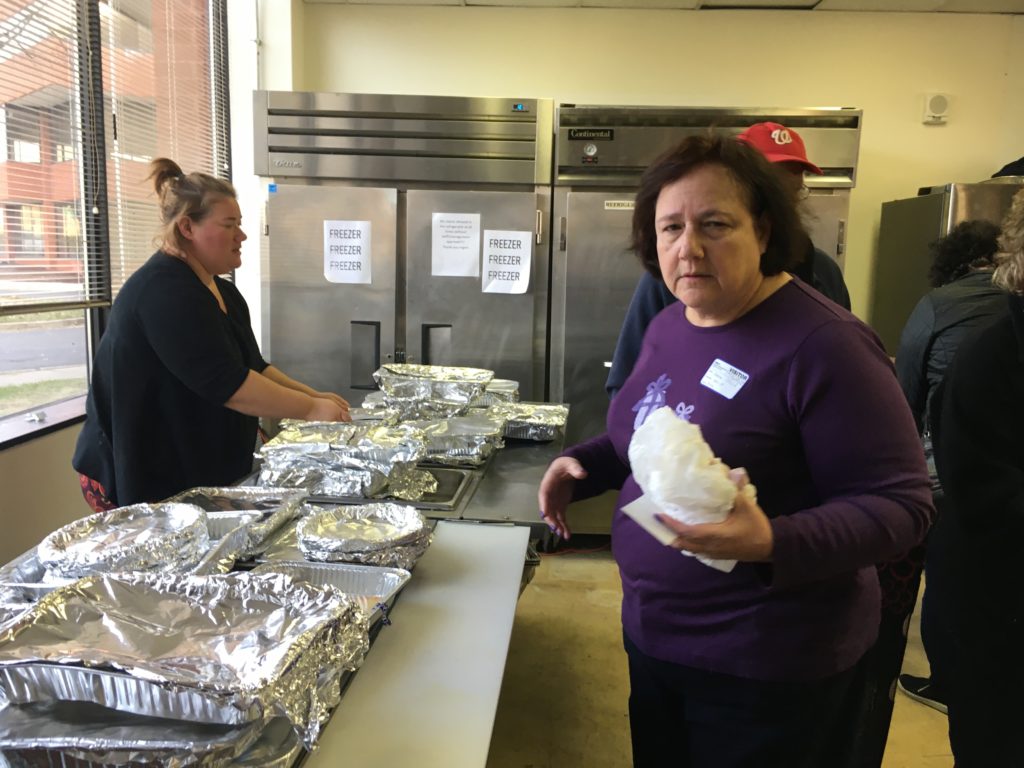 “I don’t know how [the regular staff] do it,” said Jackie Ferguson, Finch’s sister, “It’s quite a production.”

This is her first year volunteering. But for many of the volunteers, it’s become a tradition.

Finch and Goldman are also raising money to place shelter residents in a permanent housing and provide them with a welcome kit with household products and toiletries. It costs around $900 to set up a single person in an apartment and the synagogue has already raised $1,700, Goldman said.

Mountains of food still remain uneaten, which means there will be plenty of leftovers for the next few days.