There’s a new kosher restaurant in town, and it’s already drawing crowds to taste its falafel, sabich and cauliflower shwarma. New York-based Taim Falafel opened in Georgetown, its first in the Washington area, on Aug. 24.

During Friday’s lunch rush, CEO Phil Petrilli bagged to-go orders for customers waiting in a line as long as the restaurant. Others waited out on Wisconsin Avenue while their friends and family ordered.

He and his wife, Perlita Peret, work down the street and said they will likely come back often. Peret read about the restaurant’s opening and wanted to try the food.

Petrilli points to the authenticity, flavor and freshness of Taim’s food. He said the restaurants use fresh herbs, no preservatives and no fillers; i.e., the falafel is soft and light because it does not contain breadcrumbs or baking soda, which Petrilli said many restaurants use to make falafel bigger.

Chef and co-owner Einat Admony created the vegetarian menu, which can also be adapted for vegan and gluten-free options.

“People … try this food for the first time and they’re absolutely blown away,” Petrilli said. “And again, that is one hundred percent Einat: the authenticity of her recipes, her background growing up in Tel Aviv, and what that has brought to the food.”

Rabbi Shmuel Herzfeld, of Ohev Sholom — the National Synagogue, who provided the kosher certification for the restaurant through his DC Kosher agency, tried Taim’s food for the first time last week after installing a mezuzah on the front door. Maharat Ruth Friedman, of Ohev Sholom and DC Kosher, was having falafel on a salad and fries. It was her third visit to Taim.

Falafel comes in green (full of parsley, cilantro, and mint) or spicy harissa, made with Admony’s special spice blend. Taim patrons can order their entrees on pitas, salads or platters, and can supplement their meals with a side of fries or fresh juices and smoothies.
Sabich, a traditional Israeli dish, is made up of fried eggplant, a boiled egg, and Israeli salad. It comes with hummus, cabbage, tahini and fresh herbs at Taim, and Herzfeld ordered his on a salad.

Taim, which opened in New York in 2005 and has five locations there, is ready to expand, said Petrilli. It took 12 weeks to design and construct the Georgetown location, with its chick pea wall tiles and hand-painted mural — created by a member of Israeli street art group Broken Fingaz.

One customer said she found the falafel tasty, despite not being a fan of cilantro. “Sometimes falafel is very fried, she said. This “doesn’t taste very fried, it tastes like I’m eating something healthy.”

Healthy or not, the falafel is unquestionably vegetarian. That puts Taim in the center of current trends, Petrilli said.

“In the world that we live in today, people are trying to kind of eat more vegetables in their diet, eat more vegetarian, like in certain meal occasions,” Petrilli said. “And so as that kind of trend grows, you combine that with the quality of the food and it’s kind of a home run.” 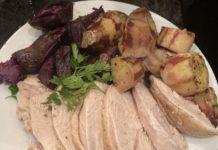